The club Cake Races took place in Santry last night. There was a healthy turn out between the two races of circa 70 athletes on a blustery and wet night and in even healthier turn out for the annual Athletes on the year awards in the club bar after the races.

The winner of the women`s Cake Race was Geraldine Reilly with Irish Junior International Hope Saunders running the fastest around the 5k loop. In the men`s race Thomas Ward took the honours with the fastest time going to Liam Roarty, back home for Christmas from Sunderland.

Presentations were made to the club`s senior athletes who had set new club records over the year including the 4 x 100m team of Isreal Ibeanu, Stuart Roche, Ciaran O`Donoghue and Keith Pike on breaking the 27 year old existing record and then to our National Senior Champions Brian Gregan and Sergiu Ciobanu .

The Athletes of the Year were sponsored by Loki Sports with John Shields and club president Paddy Marley making the presentations. The winners were: 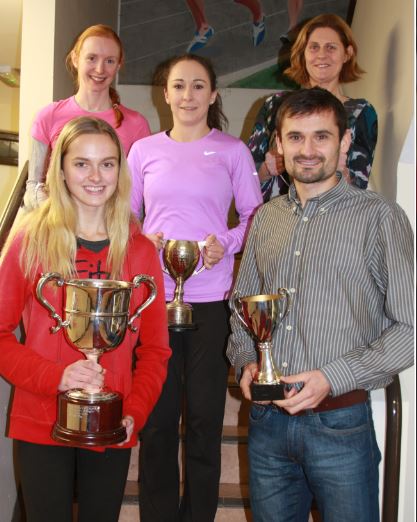