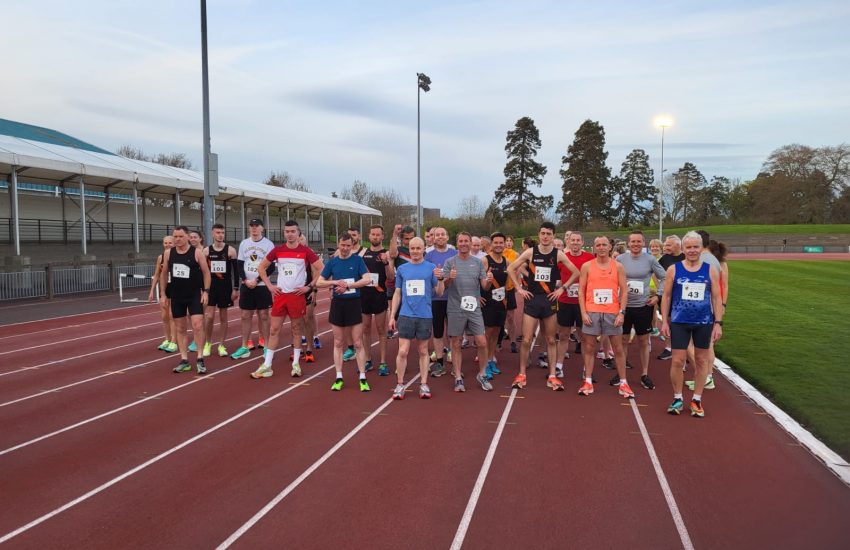 Liam Hennessy Reports: Round 2 of The Grand Prix Series for 2022 took place last night. The Mc Donald Cup, 4 Mile Track Race took place at Morton Stadium at 8pm. The weather was a clear 12 degrees, just fine for distance running. A fine field assembled for this, the second race in the series. From the gun it was clear that Niall Carberry was intent on running well. He broke away from the start of the race and it became a race between himself and the clock. Niall lapped the entire field to take the win and the fastest time on the night. Throughout the field there were many duels, with runners eager to run well.

We also presented the prizes in the handicap for the first race in the series, The Frank White Cup over 5 Miles, held on the track two weeks ago.

Our next race is the 10,000M due to take place on the track at Morton Stadium on Thursday, 29th April at 8pm. We hope to see as many of you for this the third race in the series. We would also like to welcome any club members who haven’t signed up to the series and wish to run in this or future races in the series. Just contact your coach or any member of the Grand Prix Committee for further information.

On behalf of the Grand Prix Committee we would to thank our Club President, Paddy Marley and the many officials, who helped make this race happen. It’s not only the runners who are excited to see the Grand Prix happen again. There’s always a great sense of excitement, engagement and anticipation amongst the officials taking part. I’m sure I speak for many at the club when I say that its night’s like this that make us proud to be part of this great club. Nil Desperandum !