Eoin Murray reports: The 1500m club championships incorporating the tenth race of the 2015 Grand Prix series took place last night, on the track in a deluge of rain. There were four races in conditions for running that were miserable with the athletes taking shelter in the stands whilst waiting for their race.

Despite the weather, there was still a good turnout of athletes to take part in the four races, in the men’s club championship, Adam O’Brien took first in 4.12 followed by Brian Flanagan in 4.22 and Eoin Keating in 4.25. The Ladies race was won by Hope Saunders in 4.48, followed by Alannah Cooley in 5.09 with sister Cliona in third in 5.35.

The winner in the Grand Prix was Brid Beausang, with Kevin Dowling second and Aimee Ahern in third place. The Grand Prix race was very generously sponsored by Pat Byrne.

A big thank you to all the officials who stood out in the downpour who gave up their time on the night to ensure the races went ahead. Thanks as always to Caroline for the tea, coffee, cake and biscuits.

Thanks again to Pat for sponsoring the race in memory of his son Simon who died by suicide. Pat gave an open and candid speech from the heart and encouraged us all to look out for ourselves and each other, and not to be afraid to talk to someone. 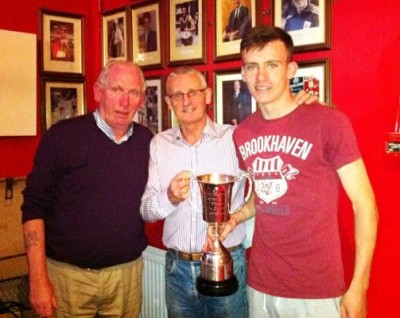