A very successful trip by Clonliffe Harriers to yesterday`s IAAF Antrim International Cross Country was capped by a superb individual win by Aaron Hanlon in the men`s U/20 race. Aaron running in the Clonliffe vest, showed up the flaws in the international selection policy for this race as he took a top class field apart to take an excellent win by a margin of some 11 seconds ahead of two Scottish athletes in 2nd and 3rd and the first Irish vest in 4th. Aaron was well supported by his club mates as the team of Cathal Doyle 39th, Eoin McCullough 46th and Brian Flanagan 47th (the scoring 4), Niall Norman 66th and Ross Kearney 70th took silver in the inter club competition. 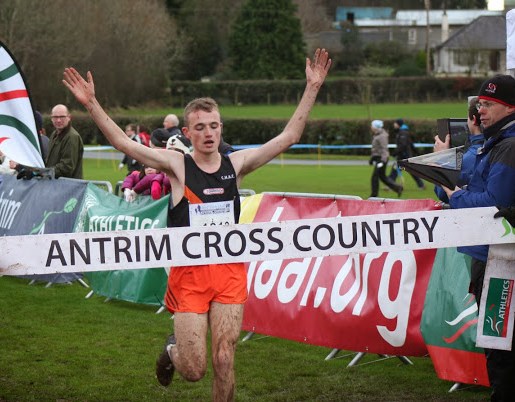 The U/17 boys team, who are last year`s National U/16 runner up, put in very strong performances. The U/17 race was incorporated into the U/20 race. Star of the team today was Adam O`Brien who finished 34th overall and lead the scoring 3 of Joseph Hession 62nd and David O`Hanlon 72nd to a fine inter club team win. Solid runs also by Alex Gibbons 78th and Greg Hosseny 99th.

The IAAF International men`s race featured one of the best fields assembled for a cross country race in Ireland. From the gun the African athletes dominated gliding with majestic ease over the mud and quickly pulled away from the pack lead by Andy Vernon (GBR), and first Irishman Michael Mulhare. After 10,000m the race winner was World Cross Country Champion Japhet Korin (KEN). From a Clonliffe perspective Stephen Scullion, running in the Northern Ireland vest had a solid run over the second half of the race to finish 14th in 30.54. Sergiu Ciobanu was 23rs (31.28) and Jayme Rossister after a good run was 28th in 31.48.

It was an excellent promotion by Athletics Northern Ireland and a day thoroughly enjoyed by all.