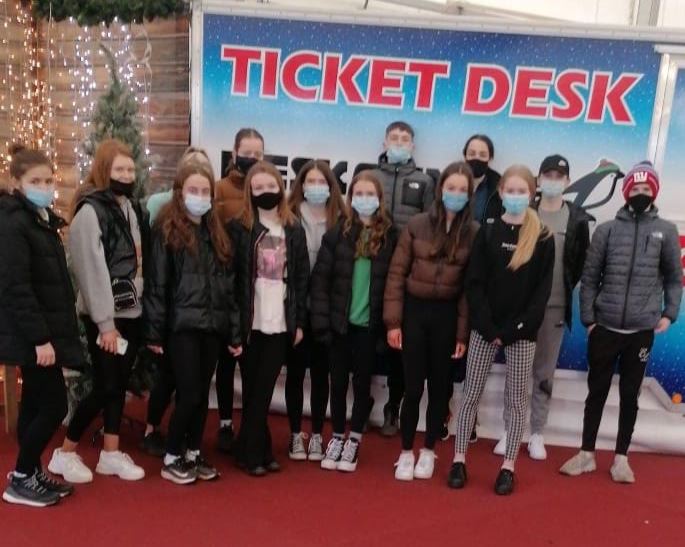 Hazel Kenny, Kate Faherty and Clodagh Nic Dhomhaill report: On Saturday the 29th of January, after a tough day out at North Leinster Schools Cross Country the day previous, Gerry Carr’s group were given a well deserved break from training, in the form of ice skating in Blanchardstown.

We met outside the ice rink, and were fitted with our ice skates, then ventured out onto the ice for our hour long session.

Some of the group fared better than others – some showed extreme promise for ice skating, like Christopher Lynch, who flew around by himself for the whole session, while others, like Jack McDonnell, spent more time on the ground than actually skating…

Sarah McDonnell and Rebecca Walsh had a few tumbles as well, often ending up on the ground in the middle of the rink as a hazard for other skaters to swerve past. Safe to say none of us will be leaving running for ice skating!

Afterwards, we headed to McDonalds for a bite to eat, kindly funded by Clonliffe. It was a bit of a struggle to find a table big enough for all 13 of us and of course Gerry, but eventually we did and tucked in to some delicious food, maybe a bit on the unhealthy side for a group of young athletes, but it’s surprising how tiring an hour of ice skating can be!

Afterwards everyone was collected and it was back to normal training the next day. Big thank you to Gerry and all of Clonliffe for letting us have a brilliant day out, and here’s to many more days like this in the future!