A bright and still morning greeted the competitors for today’s latest Dublin juvenile track and Field Championships once again at Morton Stadium Santry. The Clonliffe Harriers distance athletes put in sterling performances across all age groups, the 3000 being the offering today for U/16’s upwards.

The U/17 girls were first into action, their race being mixed with the U/16’s, the Clonliffe trio performed superbly making it a black and amber clean sweep: first Aoife Hession, second Katie Halpin and third Alanna Fitzsimons. Next into action was Sarah Bateson in the U/18 girls 3000. This was a pretty loaded field and Sarah displayed great battling qualities powering home in a very strong third place in an outdoor PB time of 10.56.

The boys also put in great performances, Sean Boyne was second U/16 (9.59). In the U/17 race a battling Niall Carberry secured bronze in an impressive 9.40. Fine runs also in this from Alex Neuroth (10.16) and Eoin Byrne (10.22). In the U/18 and U/19 combined race Aaron Cullen, U/19, took up the running from the start and after a 67 second opening lap gradually opened a unassailable lead to win in a time of 8.52. In the U/18 category Callum Simpson was a smooth silver medallist in a time of 9.14 with Daragh Carter, putting his frustrations from Friday nights 1500 well behind him, to take bronze (9.24). Alex Murray clearly still carrying a shoulder injury battled away gamely and finished in a time of 9.55.

Also in action today was the Clonliffe U/13 girls 4 x 100 team, the girls looked majestic in their semi-final easily qualifying for the final and putting in an equally gutsy fine performance in the final to take Dublin silver, the team was Kate Campbell, Rebecca Walsh, Sarah McDonnell and Ava Usanova, Ali Connelly (reserve). A short time later both Rebecca and Sarah lined up for the U/13 600 final, both girls, who between relay had also taken part in the high jump competition, were tired looking athletes who competed well in the 600 but finished outside of the metal positions.

Sally Sumola was competing in the U/16 girls long jump winning gold with a best of 5.06m. Sally was also 3rd in the 100. Keith Burke was just out of the medals, 4th in the boys U/16 long jump and 8th in the 100 final. Making it a sprints double gold today was Val Sroganvous adding U/17 100 gold to his 200 from yesterday. Alex Toomey was 2nd in the girls U/17 100, with Holly Roche 5th and Milcah Anevho 5th in the final. Earlier in the heats Sandra Egwin just narrowly missed qualifying for the final, likewise Immy Hauer just missed qualifying for the girls U/16 100 final. Also Laimis Norvaisas took boys U/12 shot silver. 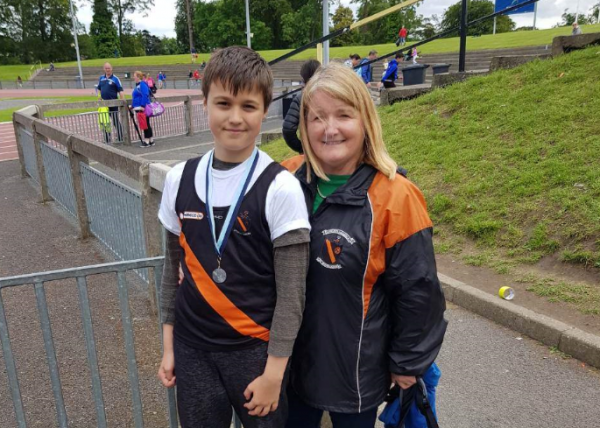 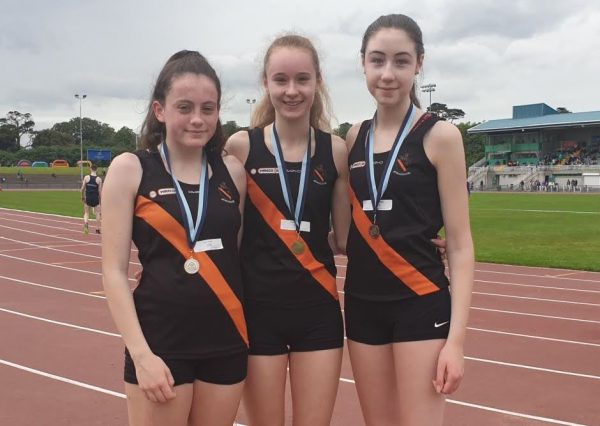 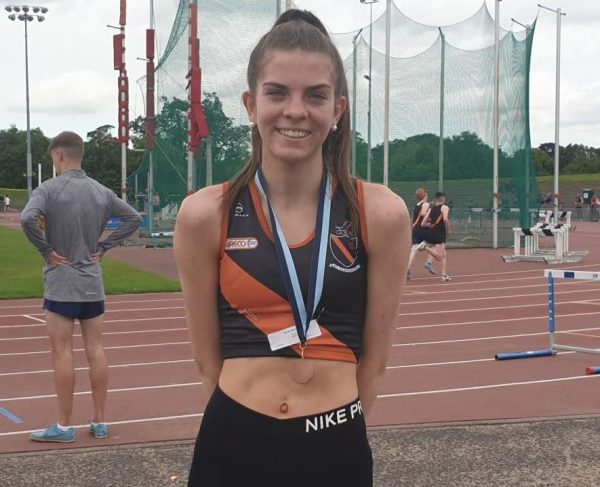 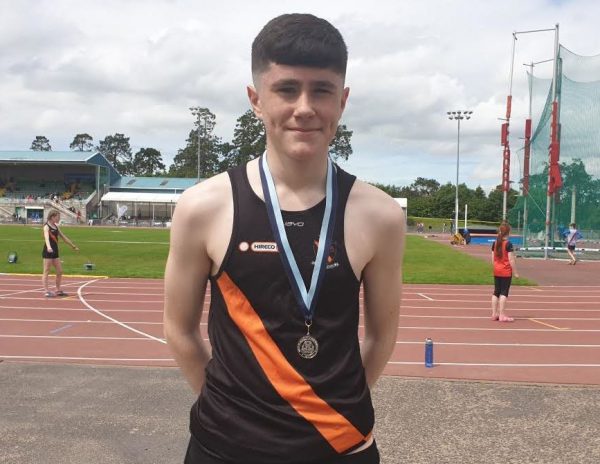 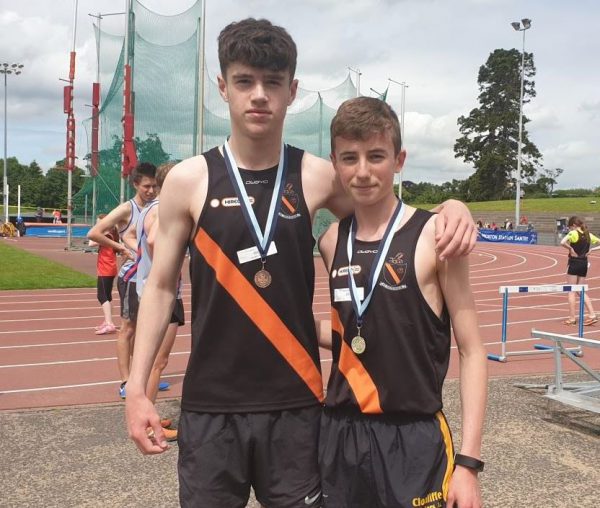 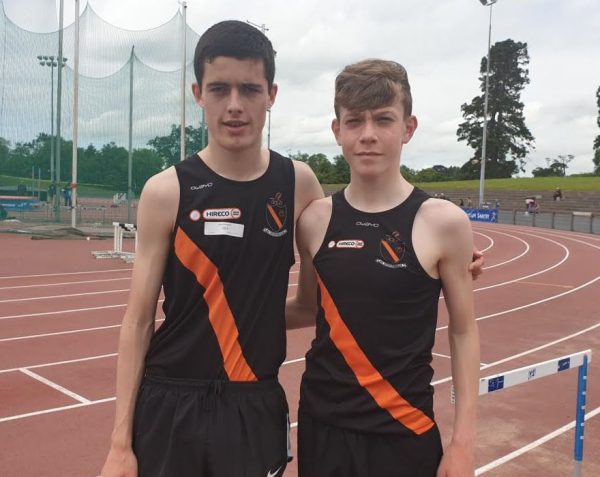 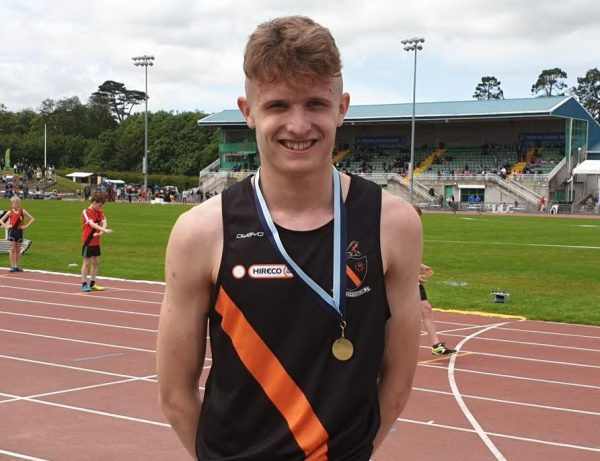 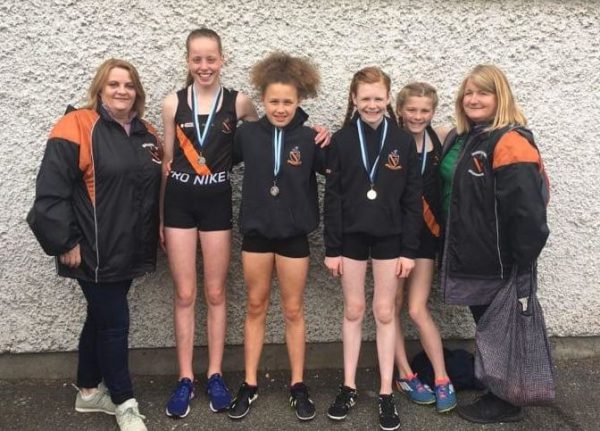 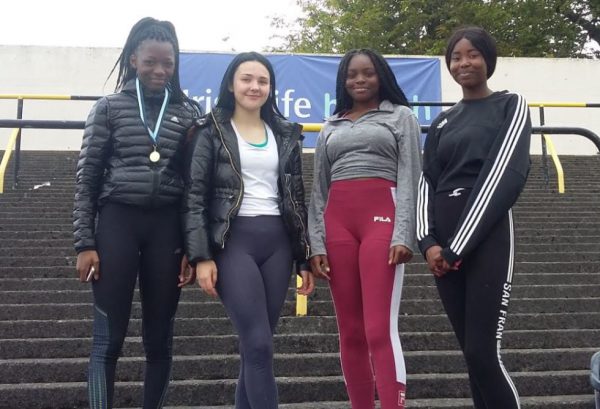 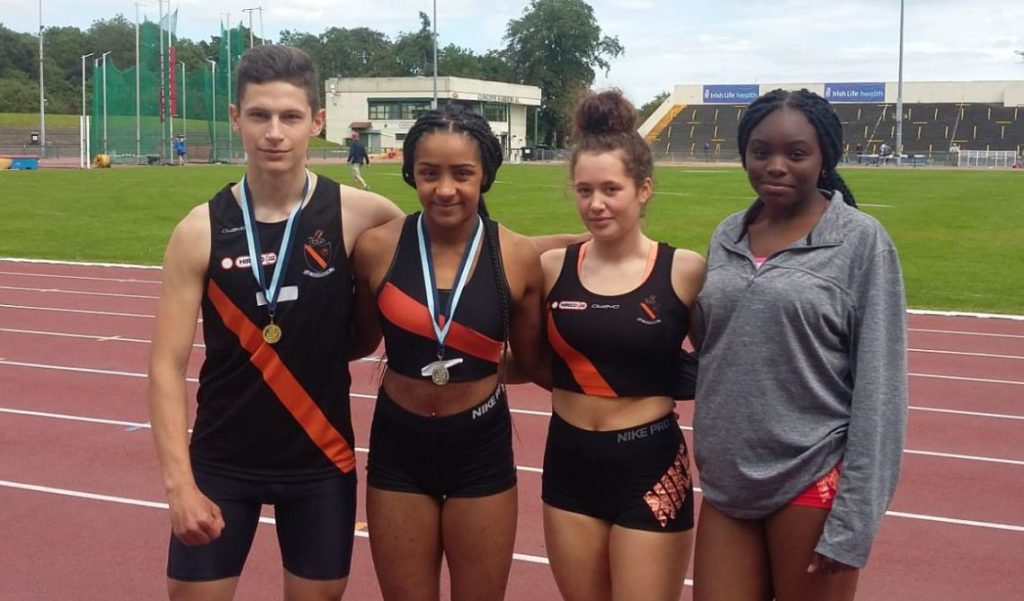