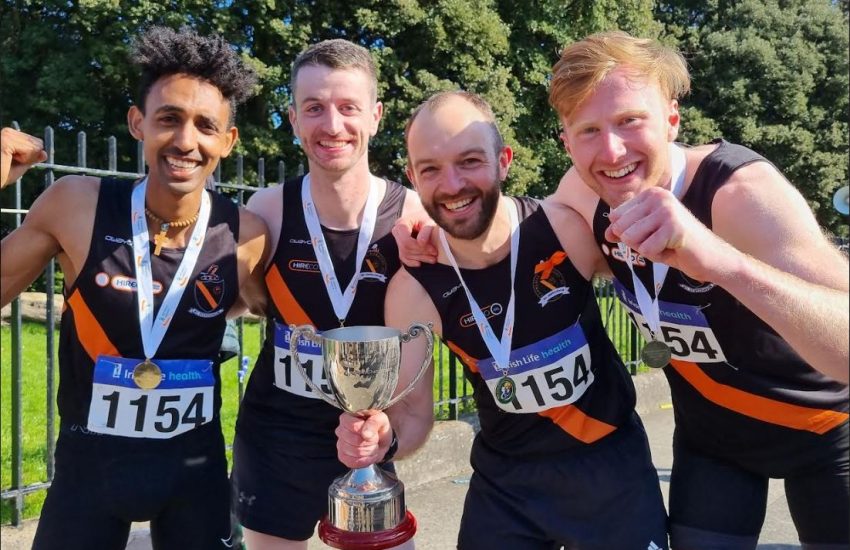 After a 14 year gap Clonliffe Harriers are senior men National Road Relay Champions after a stunning effort by the quartet of Sean O’Leary, Mark McDonald, Efrem Gidey and Ian Guiden. The senior women were also outstanding missing out on bronze by a few yards. The Master men M35 team took bronze. Brilliant to have a magnificent 15 teams taking part. What a day!

An extraordinary 55 athletes represented Clonliffe Harriers in Raheny for the national road relays. This was a record entry from the club spread across the four races on the card. As usual it was the Master women ( 1 mile x 2 mile x 1 mile) that got proceedings underway at 2 PM sharp, there were 3 Clonliffe teams competing in the W 35 category. The A team of Jenny Johnston, Ciara Peelo and Siobhan Devaney performed well to finish 7th overall in the combined time of 24.17, they were closely followed by the Clonliffe B team of Aisling Andrews, Elaine McLaughlin and Aoife O’Sullivan (25.30) in 8th position with the C team of Laura Kernan, Ann Lyons and Joyce O’Hare (26.40) in 10th place.

The club fielded 4 teams in the master men’s race, 2 each in M35 and M 50, again over 1 mile x 2 miles x 1 mile. The team of Niall Sherlock, Thomas Sherlock and Cathal McHale were rewarded for brilliant running with bronze, Cathal McHale making his club representative debut was instrumental in delivering bronze with a red-hot final mile leg of 4.46, the fastest mile leg recorded in the race, turning a 3 second deficit at the final change over to a 10 second cushion to take 3rd place. . The 35 team of B of Mick McMahon, Anthony Doran and Stephen Harkness placed 11th. In the M 50 ranks the team of David Dunwoody, Tommy Griffin and Declan Grant finished 6th with the 2nd team of Richie Barr, Alan Worrall and Sean Grimes 13th.

At 3.00pm it was the turn of the senior women (1 x 2 x 1), again it was great to see so many Clonliffe vests on the start line with 3 senior women teams lining up including a couple of the club junior athletes having their 1st taste of senior competition, fantastic experience for the girls. The A team were led out by Alannah Cooley who kept the team in the hunt passing on then to Emma Mitchell the crucial 2 mile leg, Emma ran a superb leg to propel the team right into the medal positions running the 2nd fastest 2 mile of the day (10.30), passing on to Laura Tuite , Laura ran a superb mile of 5.21 but found herself being chased down by UCD’s Fiona McKenna running the only sub- 5 minute mile of the race and was overhauled an agonising 20m from the line to place 4th, missing out on bronze by a single second! The B team of Sarah Hawkshaw, Megan O’Keeffe and Marie Howard all put in very strong performances finishing in 16th position with the C team of Naoise Cullen, Clodagh Galvin and Amy Sheehy 23rd. More importantly all gained invaluable experience.

On then to the final race of the day the senior men racing over the 2 x 1 x 3 x 2 format. An unbelievable 5 Clonliffe teams lined up for this. There was optimism that our strong A team would be well in the hunt along with the prerace favourites a crack UCD team, defending champions Raheny and the youngsters of Ennis TC featuring of course the Casey twins. Sean O’Leary led off Clonliffe and with a 9.24 leg handing over in the main pack, Raheny’s Cillian Kirwan having bolted from the pack and given Raheny a lead of 5 seconds. Next in was Mark McDonald who gave it absolutely everything in the mile particularly over the last crucial 100 with a 4.40, handing over in 5th position to Efrem Gidey for the crucial 3 mile leg. At the changeover it was Ennis TC that led by 19 seconds. Efrem quickly caught the leaders and as the athletes came back into view at the end of their 1st lap it was Darragh McElhinney (UCD) who led with Efrem right behind them, these 2 having pulled away from the pack. At the handover Efrem had ran 13.37 for his 3 mile leg as he handed over to Ian Guiden with Clonliffe in 2nd place around 5 or so seconds down on UCD who had Luke McCann on the final leg. Ian tore into the UCD lead and with a final lap of the circuit to go hit the front and opened up a substantial lead to bring Clonliffe home in 1st place and capture the national road relay title for the 1st time since 2008. Ian’s leg was a superb 9.04 with the winning time of 36.45 a new course record. UCD placed 2nd with Ennis TC 3rd.

The other Clonliffe teams as expected all ran superbly with many notable performances, the B team of Sean Doran, Georges Legentil, Niall Carbery and Stephen Cashin placed 13th (41.12), the junior team (although there is not a junior competition) were excellent: Sean Cronin 9.55 for the opening 2 mile leg, Lorcan Benjicar 4.49 for the mile leg, Sam Murray 15.5343 mile and Cillian Keegan 11.14 for the 2 mile, placing 16th overall, the C team of James Murphy, Ronan Donohue, Kevin Loftus and Eoin Keating were 21st with the D team of Scott Crowley, Peter Bissett, Ian McAlweeney and Thomas Balthazar 23rd.

A fantastic day for the club. Huge congratulations to our athletes and a sincere thank you to all of our club’s coaches.