Yvonne McDonagh reports: An overnight frost but beautiful sunshine greeted the ladies as they embarked on Ballyboden St Enda’s GAA club for the third race of the Meet & Train series (Jan 19th).  Sunday’s race was hosted by Brother Pearse AC. Over 150 ladies toed the start line. There was a sense of giddiness and anticipation in the air as the ladies waited for the gun to go for the two one mile laps.  The Clonliffe ladies were in good spirits as always with everyone keen to get going. Despite some weekend birthday celebrations Evelyn Brennan was looking fit and eager to get going. More on her race later. 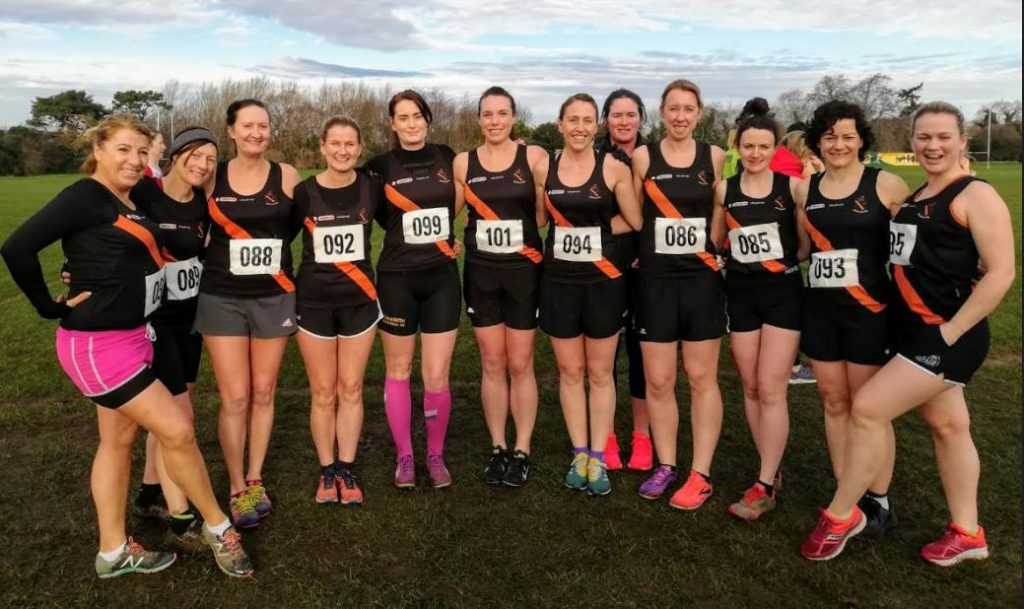 The gun went and the ladies were off.  Elaine McLoughlin was keen to get into the lead pack as early as possible.  Though her start was not to her own liking, Elaine settled in with the lead group early on.  Once again the field was led by ex international runner Niamh Fitzgerald. Emerging from the woods on the first lap our own Elaine was in 3rd position and looking strong.  There were strong showings from many of the other ladies too with Siobhan Devaney in close pursuit, followed by Clare Roche and Emma Byrne. Mel Curran was having a stormer of a race and was picking off the competition one by one.  At the end of lap 1, Elaine had moved into 2nd place and her form was looking good. With the layout of the course the rest of the girls could see how well Elaine was running and it definitely spurred them on. Orla Deighan and Yvonne McDonough were also looking comfortable midway through the race.  Anne “only doing one race this weekend” Lyons (two half marathons last weekend was more representative of a typical weekend for her!!) and Emer Brennan were close behind.

As the ladies entered their second lap, Evelyn had that steely determination on her face. It was clear she intended on doing her usual trick of passing runner after runner on the second lap.  However, today was a little different and Evelyn not wanting anyone to have an unfair advantage in the race was sure she saw a man trying to join in as they went through the forest area and so she dived across to stop him in his tracks.  Evelyn hit the mud, testament to her dedication to the cause. Once again she was willing to sacrifice her own finishing position for the fairness of the rest of the field! If anyone has some spare Persil or Fairy non-bio I am sure she would appreciate it to get the mud out of her singlet!  Janette checked on her welfare as she went by but the ever selfless Evelyn insisted she go on.

As the leaders approached the long final straight Elaine was in a strong position sitting in 3rd just behind local favourite Sinead Tighe and ahead of Eimear English of Dunboyne AC.  Having worked hard at the lead of this small group for nearly a full lap the two girls pushed on and just took Elaine as they approached the finish. Elaine had a super run securing her best finishing position to date and showing a lot of promise to improve on this in the final round of the league.  With Siobhan coming back into form and more athletes available for the final leg of the series, it is expected that the Clonliffe ladies teams will continue to move up the overall leaderboard. Today saw a number of the ladies beat many who have been ahead of them in the previous races. The hard training is clearly paying off.

Thanks again to Ciara for coming out to give us all a cheer and to Brid Beausang who pulled up injured during the warm up, for giving us all a big shout out and lots of encouragement throughout the race.

The final race of the series will take place in Abbotstown on February 16th at 11am.  With our official supporter and photographer away that day we are appealing to any other club members who might be free to come along and support us.  If anyone would like to run the last race of the series please get in touch with any of the girls who have run to find out more.

Well done to all on the excellent performances today!