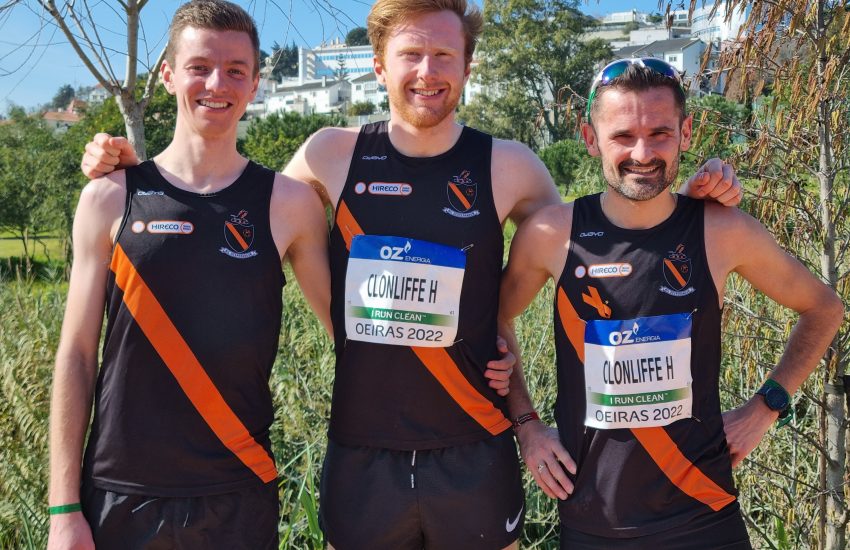 The rules of the competition now provide for a team of four, only, to run with 3 to score. Unfortunately the club was down to the bare minimum of three, due to injury ruling Ian Guiden out of the reckoning and also due to unavailability for varying reasons of a number of the cross country squad. Clonliffe are therefore down to Sean O’Leary, Jonny Whan and Sergiu Ciobanu.

The team arrived in Lisbon late on Friday evening and travelled to their accommodation 30 or so minutes away from Lisbon airport. After a solid night’s sleep Saturday morning saw the team train on the course, it was a tough European course with many steep climbs and sharp downhills and tight turns. Underfoot the ground varied from sand to rock hard. The consensus was track spikes or no spikes, the winter 9s would be left in the hotel!

Saturday evening the team escaped the hotel food, not exactly Mitchellin starred it should be said, taking a “dander” (Lisburn for a stroll, thanks Jonny) to a local Italian restaurant, (when in Portugal…) and after pasta and pizza all slept soundly.

Today saw the Clonliffe Trio give it their best shot. The competition was exceptional including many Olympic and European standard athletes. Amongst the big names on Spanish team Atletismo Bikila former three-time winner Ayad Lamdassem who was a fifth-place finisher at the Tokyo Olympics. Their was a record team entry with some 31 clubs lining up for the senior men’s race for the 12.05pm start. The 10,000 race distance being 2 1000m laps and 5 gruelling mile laps.

The Clonliffe placings on the day where: Sean 46th (32.28), Sergiu 67th (33.25) and Jonny 80th (34.35) with the team finishing a credible 18th place overall. The guys quiet independently commenting that it was the toughest course they had ever raced on.

Congratulations to the Ennis TC junior men on an exceptional performance lead by the gold and silver of the Casey twins to take European gold. Likewise to DSD’s Hiko on his bronze in the senior men’s race.

It was a great experience for the Clonliffe team and also extremely important that Clonliffe supported the return of the European clubs. The invitation to compete was a little unexpected with the rule change not having been widely circulated however it certainly gives the cross country squads something to really aim for in the short-term. The team will return home tomorrow.