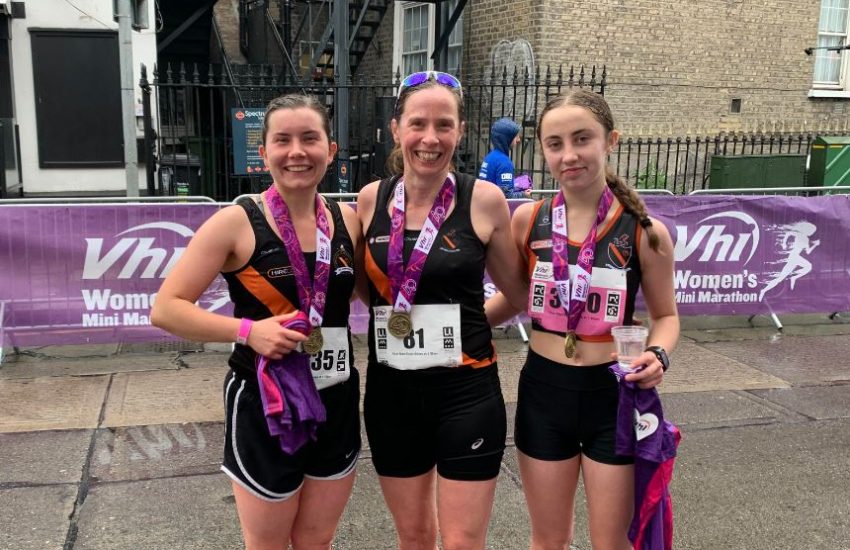 Ciara Peelo reports: Today was the day the women of Ireland took over Dublin City. Over 12000 women braved the elements and finished the 40th Women’s Mini Marathon. Our very own Frances Masnfield was credited in the official race magazine as one of the women responsible for setting up a meet and train group for the women near her home for the very first race back in 1983.

Though it was an unseasonably damp day for the 40th edition of the Women’s Mini Marathon, spirits on the course were not dampened one bit. With participants used to running in warm, balmy, humid conditions today’s race was definitely a very different experience. To be honest it was much more pleasant for the runners and it turns out the route isn’t nearly as bad as it often seems! Just after the wheelchair and visually impaired athletes toed the line there was a rendition of “Molly Malone” just before the serious action got under way.
Today’s race also doubled as the Dublin Women’s 10km Road Championship. Though the Clonliffe representation was lower in numbers than previous years there was still a great spread from across the various training groups. Our youngest competitor on the day was Harriet Kenny running her first ever 10km. While Harriet represented the youth along with her sister Hazel and Sorcha Gannon-O’Connor, there was lots of experience on the course too with representations from our Senior and Masters athletes. The overall winner of the race on the day was Aoife Kilgallon from Sligo AC, followed closely by the Nic Dhomhnaill sister.
First home on the day for Clonliffe was Ciara Peelo in 39:38 but the real kudos for run of the day must go to Hazel Kenny who stormed home in 44:01. Hazel was absolutely beaming and gave a great account of the race. She is delighted that next year she will be able to start right up the front and no more having to squeeze through hundreds of women in the 2nd and 3rd waves to get up relatively close to the front! Having written a piece for the organisers, on her journey to the race and her fundraising for GOAL, Hazel was one of the VIPs today and was mixing with some of the ladies who have completed all events over the past 40 years. Hazel found the support on the course great and was delighted (as we all were) to hear Paddy Tuite giving us Clonliffer’s a shout out with just 400m to go. For those who have run this race a few times, hearing Paddy’s voice is very welcome and a sure sign that you are nearly home.

Next across the line for Clonliffe was Kate Connell, just breaking 47 minutes and smashing her goal of sub 50 for the day.As we await the results for the Dublin Championships, can we take this opportunity to thank all the coaches who give up their invaluable time and knowledge to get us around these races in such great times and spirits.

Hopefully next year we can get a return to the larger Clonliffe contingent participating and enjoying the day. Hazel and Harriet definitely plan on bringing a few more with them.Below are all the results, apologies if anyone is left out.