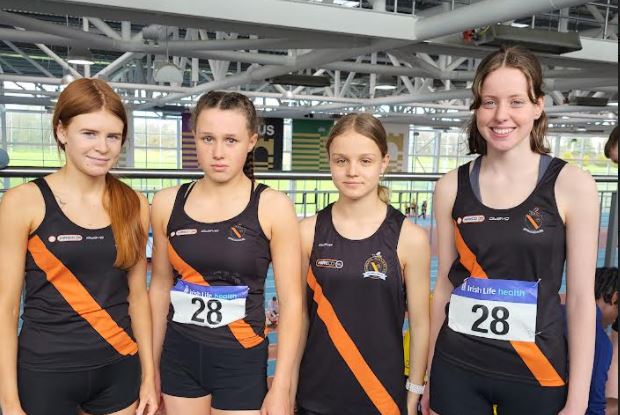 Eugenia Bateson reports from Athlone: U16 Boys took our Nil Desperandum motto to their hearts quite litteraly. Possibly the first time in the history of the Club we have a Boys U16 Team in the Indoor National 4x200m Relay.  And thats only the start of the drama! After a late withdrawal with unavailability and an unfortunate injury to Sprinter Jaydon Carroll,  we wish him well and a speedy recovery,  it was back to the drawing board at the 11th hour.  The boys earned their place in a National Final and as a group they were not letting that opportunity pass. Charlie Duffy took a late call up as he is just returning from injury with a response of “what time do I need to be there?” Cathal O’Neill , a promising middle distance man took a mature decision to take on the blocks, completely out of his comfort zone but putting his team first. Issac Moss and Jack McDonnell took charge or baton practice and team motivation.  Gerry Carr is clearly building strong Clonliffe attitude as well as athletes.  An extraordinarily brave performance from this team in finishing 6th in their heat.

The U16 Girls team have National Championships experience and were well up for the challenge of grabbing a place in the final. Drawing lane 6 in the 3rd and final heat Kate Campbell took the blocks passing to distance specialist Rebecca Walsh, into new comer and talented sprinter,  Emily Jancha, who probably ran the fastest leg for the team, passing to the speed that is Ava Usanova. This team pulled it out of the bag finishing 3rd in the heat in a time of 1.48:68 earning a well deserved place in the final,  much to their shock!! Interestingly all 3 small q’s came from their heat with all 4 teams taking places in the final. With a call up to the final a mere 35 mins later there wasn’t much recovery time.

The girls drew lane 2 in the final. 50 mins after leaving the track from their heat and Kate is back in the blocks.  Fantastic runs from all 4 ladies putting the U16 Clonliffe Girls as 6th fastest 4x200m indoors in the country in a time.of 1.48:58.
Brilliant finish to the indoor championships.