Noel Guiden reported on the administration matters arising in respect of the club’s affairs over the previous twelve months and outlined the work which had been carried out by the various sub committees, he also advised the members of the representation of the club at Dublin County Board meetings and at Morton Stadium Management meetings, he stressed the necessity for club members to become more involved in the clubs affairs and encouraged members to make themselves available to come onto the various sub committees and to help out with the clubs race promotions. He thanked the President, Officers, Committee athletes and members for their endeavours throughout the course of the previous twelve months.

Joe Cooper reported on a mixed year where the Senior Men’s team had retained the National Senior Cross Country title but had failed to retain the National Track and Field title. He took the members through the highlights on a month by month basis throughout the course of the year and on conclusion thanked the athletes for their hard work and dedication, he thanked the committee for their backing throughout the past year and paid tribute to the clubs hardworking coaches.

Eoin Murray reported on a healthy financial set of accounts, he outlined that overall the club was in a healthy financial position and in particular he reported on a substantial increase in members subscriptions over the previous twelve months, he stressed the importance of the club members becoming involved in the various races wherein the club was providing stewards as this was a healthy source of Revenue. He then took the members through the club’s financial accounts for the previous twelve months and dealt with questions from the floor.

Gladys Cooper reported on another successful year for the juvenile section with many excellent and promising performances far too numerous to mention, she reported on an increase in juvenile numbers to approximately 150 young athletes, she paid tribute to the coaches who help throughout the course of the year for their enthusiasm and commitment to the club’s young athletes and reported on a very successful trip to Wales in the early summer where 36 juveniles competed in a Track and Field Meet in Liverpool Harriers.

Paddy Marley outlined the great work and commitment shown by the chairs of the club’s various sub committees including Tom Griffin for the Christmas Cracker 5K, Mick Kearney for the Clonliffe 2, Noel Guiden for the Brother Invitational Cross Country and Morton Games, Noreen Keane for looking after the Women’s 50th Anniversary, he also paid tribute to the work which was carried out by the club’s members in the hosting of various other events and in particular the European Team Championships in the Stadium and the National Inter Counties Cross Country. He paid tribute to the work carried out by the club’s captains, Joe Cooper, Gladys Cooper and Pamela Cooper and to the coaches, the club’s committee and all of the members who had made 2013 such a successful year for the club.

The President went on to thank all of the club’s various sponsors over the year and in particular Hireco who have been a committed sponsor of the club for many years now.

The following officers and committee members were elected

Dominic Brannigan made a presentation in connection with the Clonliffe Harriers History Book which will be launched on the 2nd of December, he thanked all of the clubs members and family of deceased and former members for their contributions and in particular paid tribute to the excellent work carried out in respect of club statistics by Killian Lonergan. dominic made a presentation of the first copy of Clonliffe Harriers 1886-2013 to Paddy Marley. 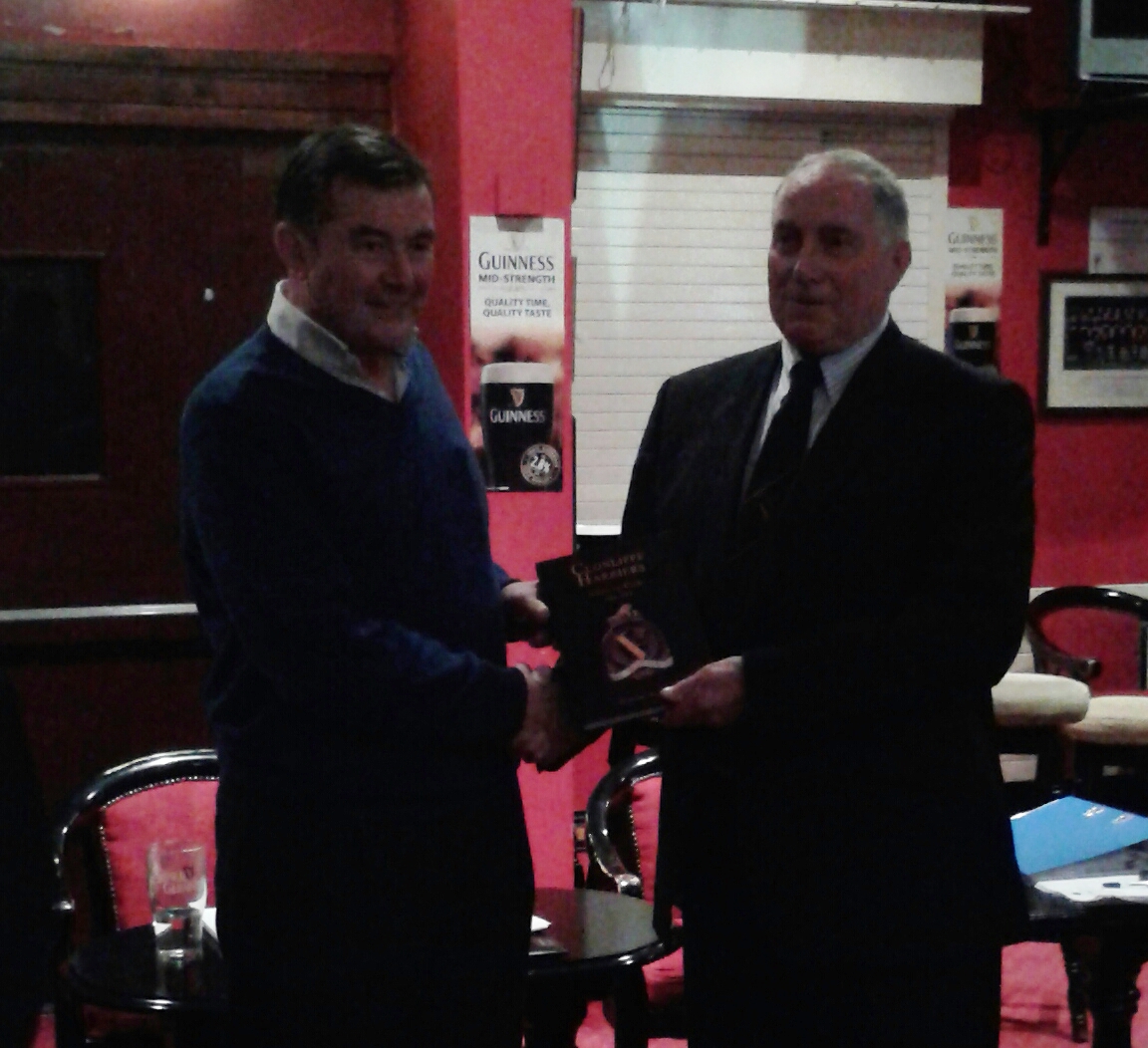 Gerry Carr raised the issue of the non compliance by athletes with the ban which had been imposed on health and safety grounds at the 2011 AGM concerning the use of personal headsets and sought the committee’s view as to how this ban was now going to be enforced. The Committee agreed that the ban should be absolutely enforced and that athletes who continued to avail of headsets during Clonliffe training time would be asked to leave the track immediately.

Tom Griffin in respect of the Christmas Cracker 5K requested that any members who have an involvement with companies who provide samples or suchlike make themselves known as he was looking for items for the post race goody bag.

Noel Guiden advised the meeting that the Goal Mile would return to the Morton Stadium on Christmas Eve (10 a.m. to 12 noon) and requested the members to support this very worthy cause.