A great morning`s athletics at round 1 of the Juvenile Spring series on The South Beach in Skerries this morning. Now in it`s 3rd year the series is proving very popular with the young athletes and their parents, a short programme of middle distance races packed into an hour. The 2013 version now includes athletes from Skerries AC, Lusk AC, Portmarnock AC, Balyboughal AC and Clonliffe. Once again our friends from Skerries AC have set the mark with an excellently organised day: a lovely course featuring a couple of water jumps, teas and coffees, a beautiful spring morning and an incoming tide to fccus attention on moving through the programme smartly! 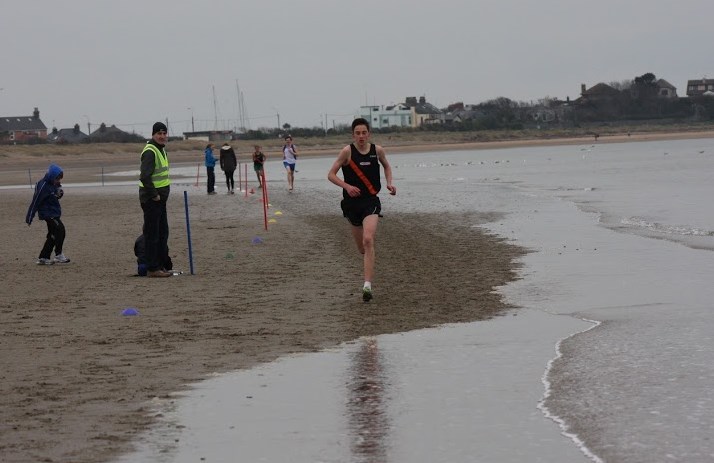 A great turn out of athletes in today`s races, the girls and boys U/13 races in particular having very big numbers and providing a wonderful spectacle reminiscent of “Chariots of Fire” as the athletes ran along the shore line splashing through the incoming tide.

The Clonliffe athletes did themselves proud with some impressive runs. Young Jonathan Fitzsimons chawking up the 1st win of the event in the boys U/9 race. Finished of the day was in the girls U/11 race, a dead heat between Clonliffe`s Aoife Hession and Lusk`s Katie Halpin. Other Clonliffe wins were provided by David Tuite boys U/13, Ruth Bergin girls U/15, Joseph Hession boys U/15, Laura Tuite girls U/17 and Cathal Doyle boys U/17. So pretty impressive 7 wins from the 10 races. More importantly, however, is that this series provides competition for all in a fun, relaxed way and is to encourage young athletes to put on their Club colours and take part in races. So onwards and upwards. Next week the series goes to Prtmarnock for the first time, details during the week. Well done and thanks to Skerries AC.