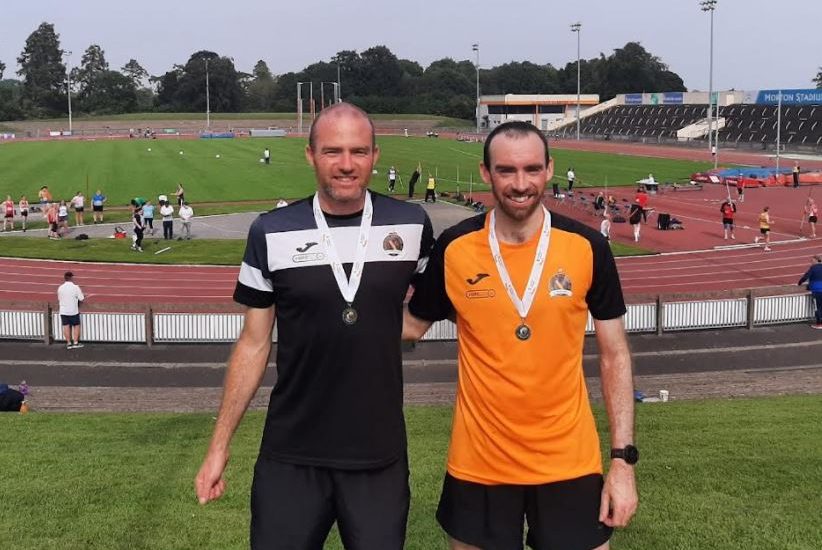 At yesterday’s National Masters track and field championships held in Morton Stadium there were excellent performances from the Clonliffe master athletes with hard earned gold silver and bronze medals won by the black and amber.

Starting off with the master women it was a golden day with Edel Maguire in her very first outing for Clonliffe taking double gold as she won both the W60 400 (71.21) and high jump (1.30). Also with yet another double gold was the Clonliffe legend that is Frances Mansfield, Frances taking W 75 hammer with a 19.43 best throw and in the discus a best of 12.57 secured her umpteenth national title. Also taking gold was Jenny Johnston W35 javelin, although there was a minimal number in that age category Jenny had the satisfaction of seeing her best of the day, a fine 28.10 recorded as the longest throw of the day. Jenny also earlier that morning had battled to 800 bronze having run a brave front-running race as she recorded a time of 2.22.30.

That effectively closes the curtains on this 2021 track and field season. This season was held in very difficult conditions for athletes and indeed officials alike with constantly changing restrictions and regulations. The ‘behind closed doors’ dicta imposed on our sport has been difficult to take and understand particularly in the light of the attendances at other sporting and non sporting events. Hopefully however all restrictions will come to an end next month leaving us all in a better place to look forward to the cross country season ahead for athletes, coaches and club spectators. In the meantime Clonliffe do have a number of end of season track events for club members to look forward to starting this Thursday with the ‘night of 3000s’, the club 10,000 championship on September 30 and then the Walker Cup in October.

Also: On Saturday the 4th Ciara Peelo was 36th in the Seamie Weldon Memorial 5K Road Race in Ardeee in 19.24.