The National Road Relays took place in Raheny this afternoon on a fine sunny Spring day in pretty much idea conditions. From a Clonliffe perspective the highlight on the Meet came in the very first race as the O/50 Master women`s team of Collette McKenny, Bernie Byrne and Geraldine Reilly destroyed the opposition to comfortably take National gold. The splits were: Collette 6.23, Bernie 12.43, Geraldine 6.04. 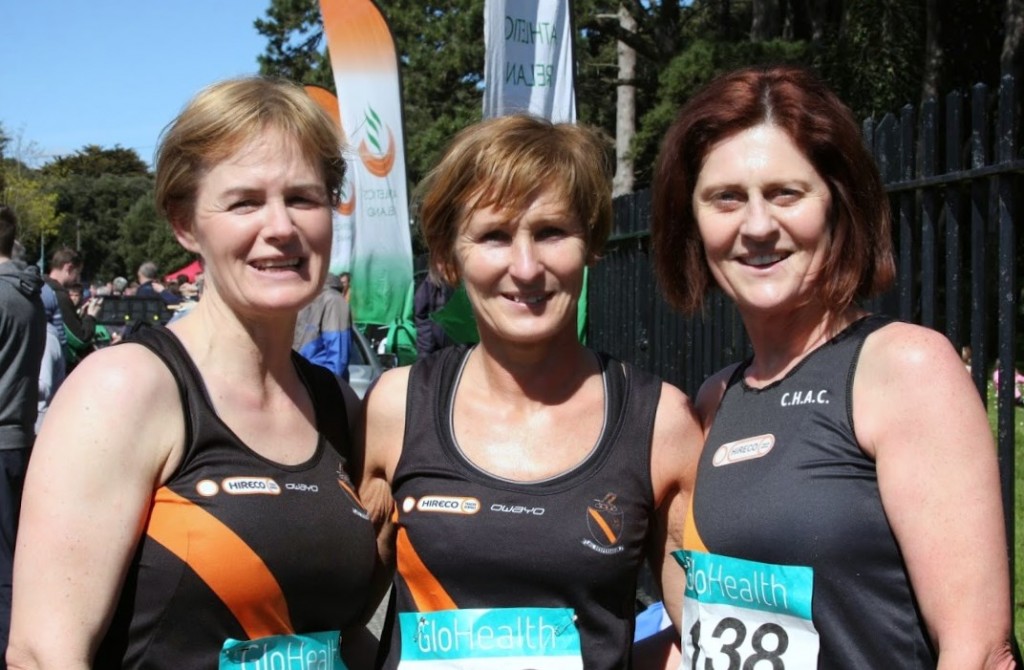 Next up the Master men with Clonliffe fielding two O/50 teams the A team Jeremy Chapman, Philip O`Doherty and Kiernan Murphy and B team Tom Monks, Maurice McCrohan and Colm Doran  , both performed well but where never in contention for medals. The A team placed 6th with splits of Jeremy 5.18, Philip 11.08 and Kieran 5.44. The B team finished up 9th with splits of Tom 5.38, Maurice 13.08, Colm 6.51.

Likewise the senior women finished well down the pecking order, this team had been weakened somewhat by late withdrawals, however the three athletes, Hope Saunders, Bernadette Kiernan and Louise Carrigher  all put in solid run, young junior athlete Hope Saunders in particular ran a fine opening mile leg of 5.12 to hand over in 3rd place Bernadette recorded a time of 12.19 for her 2 mile leg and Louise 5.54, the girls finishing up 12th overall.

Finally the senior men, again the team was hit by injury and a team of Ian Guiden, Andriu Jenkinson, Tudor Mircea and Mark McDonald put in a solid enough outing. Ian Guiden was solid over the opening 2 mile leg, and a good mile leg from Andriu Jenkinson put the team up to 3rd but that was as good as it got, and ultimately a final placing of 7th was all there was to show. The splits recorded were Ian 2 miles 9.38, Andriu 1 mile 4.33, Tudor 3 miles 15.13 and Mark 2 miles 10.21. The Intermediate team finished well down the field. The splits were Ernie Ramsey (11.02), Sean Doran (5.10), Tom Sherlock (16.15)and Dave Brady (11.08).

The men`s race was won by Donore Harriers making a welcome return to national prominence with John Travers running a superb 3 mile leg that as usual was the key to victory. It must also be said that there was a great turn out of teams today with no less than 25 teams contesting the senior men`s race and big numbers in the other three races. If only there was the same commitment to the country!