The overseas news continues. Following on the news of Brian Flanagan`s superb run in the US on Friday, today we bring you more from afar! First off “The Road Through Morocco to Abbotstown” from Dave Flynn:

Flynners tales : Ifrane Morroco Home of El Gerouj
It is now the end of my fifth day in ifrane Morroco located at 6100 ft altitude up in  the African mountains . My trip was pretty straight forward flight from Dublin to Paris. Then Paris to Fez where I met my training partner Soufiane Bouchiki, a Belgium, and a lift from his friend to Ifrane.  The only thing about Moroccan people is they love to skip que’s I mean I was sure I put this all behind me in primary school but it was game on in Fez airport especially old people I was getting elbows from all directions.

I tried to be positive and think it will prepare me well the start of nationals! Another thing is the looks you get off morrocan people . A few came over and asked for selfies with me . Now even I couldn’t put my finger on this one could it be that they all watched the 2016 3000m steeplechase Irish nationals where I nearly kicked down Rory Chesser from the depths of hell but just came up short ? My friend immediately through that theory out the window and just said it’s because I’m white!
My first run in Ifrane was great we went to a 2k dirt loop where El Gerouj did a lot of his training then we ran past a bunch of monkeys who jumping all over the place . (Photos to follow) Later on we went to the track which is in very good condition and saw El Bachali second at worlds this year in the steeplechase.

I then got invited for a traditional morrocan dinner in one of my training partners friends apartments (a 2.10 marathoner ) we got there and sat on these really long sofas then this woman comes out and starts serving all these morrocan dishes.  I asked who she was and they said that’s Fatima she’s paid to cook all the meals everyday and let me tell you she’s an unbelievable cook. Anyway after dinner . One of the guys shouts “Fatty” and she sticks her head out of the kitchen and they start chatting do im obviously thinking “Jesus’s that’s a bit harsh calling her that after such a nice meal”.  Then I ask my friend and he says that her nickname in Morrocan I was afraid to tell everyone what it actually means in English so I just go along with it and call her it too.

I’ve never been so nervous for a session then I was today . The build up started yesterday with Soufiane at lunch time . He kept saying how hard tomorrow is going to be and that we are going to die doing this session . I’ve known Soufiane around 8 years now he doesn’t really train with anyone except me and one thing you need to know is he likes to train very hard . He’s ran 13.22 5k and was one spot off making the world 5k final but one thing about Soufiane is he wants to get you ready for these workouts so we will be at dinner or having a coffee and he will say out of no where “So you gonna be a pussy or a man tomorrow ?” Stuff like that so the morning of the workout we went for breakfast where he said several times “Man this is gonna hurt today ” At one stage when I got back I looked through my bag for a bib number I was that convinced I had a race today .

We both got through our workouts anyway and impressed him of the shape I’m in at the moment. Tomorrow we got up to 8000ft for our long run I’m sure I’ll
have another story to tell by then.
Flynner

Next up we`re in Copenhagen where post Ireland`s “entertaining” nil nil draw last night Clonliffe athletes Shaun Conaghan (he`s the one doing the Packie Bonner impression) and Ian Guiden discuss tactics (ie which of them is going to tell Peter McDermott that they`ll be otherwise occupied when the group are training in Trinity on Tuesday night!) 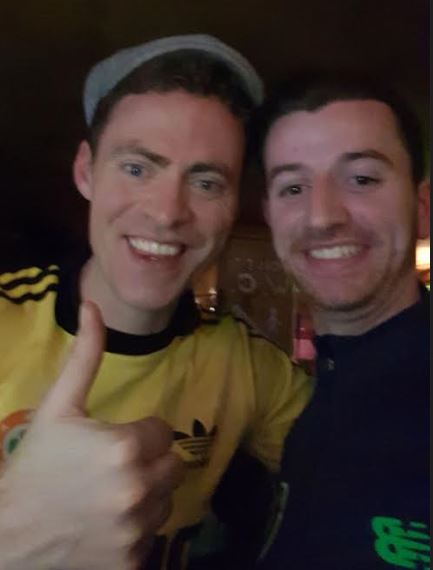 More tales from overseas and Jayme Rossister got a very solid indeed race in yesterday as he aims towards the Nationals this day two weeks. Jayme takes up the tale: “Just a note to update you on a league race I had yesterday. Placed 4th in the first round of the Birmingham cross country league at Cheltenham for Loughborough. 32 36 for 10.1km. I’ve ateached a picture of the wee stream we had to negotiate. So training for the steeple season early!” 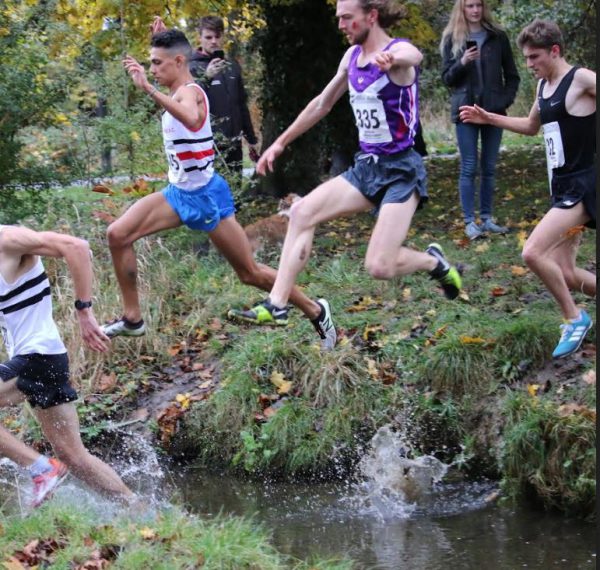 Back on the Road Racing front, Sean Doran put the spikes to one side and laced up the racing flats for this morning`s Greenhills 5k in Drogheda where he finished 3rd in 16.22.

Any other Clonliffe racing in the Park or elsewhere text results to 0879599888.