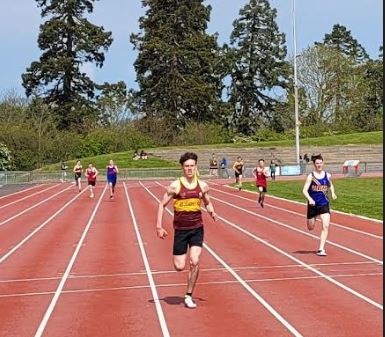 Over the course of this week the qualifiers for the Leinster schools finals have been taking place in Morton Stadium. Many of the clubs athletes have been taking part for their schools competing mainly in the north Leinster’s and West Leinster’s. With apologies for anyone missed over the course of a long week the following are the results to hand;

Wednesday, the North Leinsters day 1: in the inter-100 Ava Usanova (Sutton Park) was 2nd in her final and qualifies for the Leinster finals with Emily Jancake (Dominican) 5th. In the junior 75H Caoimhe DelBello was 5th Sarah McDonnell was a good 3rd in the junior girls triple jump. In the 1500s Mya O’Reilly (Dominican) was 7th in the junior, 7th also in the inter-girls for Clodagh Nic Domhnaill (Mount Temple) and 8th in the senior for Naoise Cullen (Portmarnock). Cian Whelan came 2nd in the senior boys 1500. JD Kelly won the inter 400. James McDonnell (St. Aidans) was 3rd in the senior 400. In the inter boys steeplechase Sam Murray (St Aidan’s) took the spoils, while Sean Boyne (St Aidan’s) did likewise in the senior boys steeplechase with Cillian Keegan (St Aidan’s) taking silver. Tom Breslin (Aidans) was 3rd in the inter steeplechase. Matei Uraschi (St. Pauls) won the U/16 boys mile with Tom Breslin (St. Aidans) 3rd, Rory Quill 4th (Aidans) and Devon Morrisey (Aidans) 6th

Thursday, the West Leinsters where Niall Carbery (Ard Scil Ris) come to be qualified for the Leinster finals placing 3rd in the senior 5000 in a new PB of 15.12. Also qualifying courtesy of a third-place finish in the inter-boys 3000 (although they did run 3400) was Lorcan Benjacar.

Friday, north Leinster day 2: Hazel Kenny (Dominican) was 4th in the inter-girls 3000. In the inter-boys 3000 Sam Murray (St Aidan’s) was 2nd with Matie Ursachi (St. Pauls) 3rd and both will go through to Leinster’s, Oran McGabhann was 7th in that race. Sean Boyne was 1st in the senior boys 5000 with Cillian Keegan also qualifing placing 3rd. In the 800s Rebecca Walsh (Mercy Coolock) was 5th in the junior, Naoise Cullen (Portmarnock) was also 5th in the senior. In the junior boys 800 Jack McDonnell (Aidans) was 5th, in the inter Rory Quill (Aidans) was 6th, Cathal O’Neill (Aidan’s) 14th and Aaron Murray (St Kevin’s) 16th. On then to the sprints where Jack Kane placed 6th in the inter-200, Sarah McDonnell was 3rd in the junior 200 girls final and Ava Usanova 2nd in the U/16 200. JD Kelly was 1st in the inter 800, making it an 800 and 400 double, with Jonny Fitzsimons (St Aidan’s) 2nd. In the senior girls 400 hurdles Natalia Gill finished 3rd. The field events saw a 2nd place finish in the inter girls high jump for Cadhla NicFloinn (Santa Sabina) and in the inter boys long jump Noah Rossi was 11th.

Again apologies if anything is slightly inaccurate but our trainee journalists did their best!