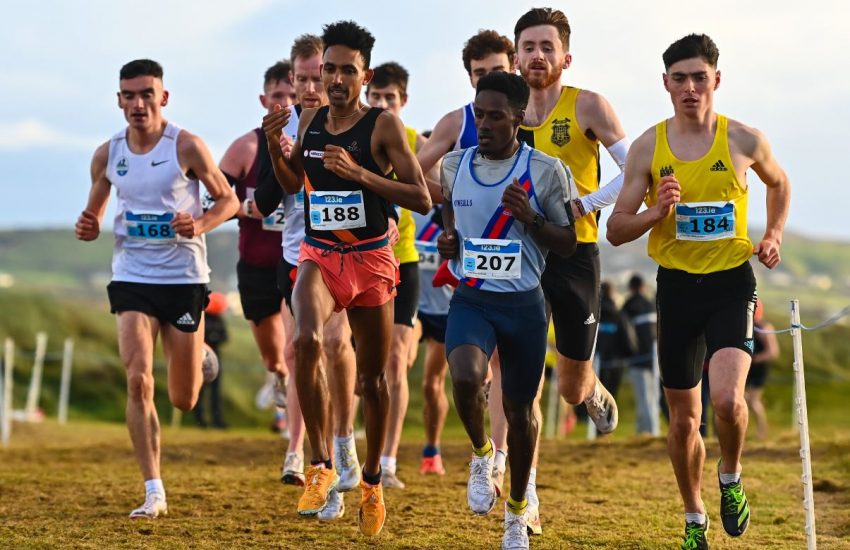 In a break from recent editions, the National Senior, Junior and Juvenile Cross-country
Championships relocated from the National Sports Campus in Abbotstown, Dublin to the
picturesque surrounds of Sheephaven Bay on the Rosguill peninsula, north Donegal. This was the
first time the Championships had come to ‘the forgotten county’ since 1999. The hosting club,
Cranford AC (all of 61 years old) provided the course location on this occasion: the impressive
Rosapenna Golf & Hotel Resort, a veritable golfing mecca in this remote corner of the island, home
to no less than three top class golf links courses including the latest addition, the Tom Doak-
designed St. Patrick’s Links which has quickly made its appearance on several “Top Golf
Destinations” lists across the globe. Our own Club President, Paddy Marley in his Athletics Ireland
role and extensive competition experience was able to lend his advice and guidance to Cranford for
what would surely be a momentous and unforgettable day for the Donegal club. Under the backdrop
of the imposing Errigal and flat-topped Muckish on one side and framed by the beautiful bay with its
sandy beaches on the other, this certainly had the making of one of the more spectacular settings in
the proud, long history of the Championships.

A coachload of Harriers made the road-trip to the Northwest on Saturday, comprising 5 teams: U16
Boys, U18 Boys, Junior Men, Senior Women and Senior Men along with the supporting crew of club
coaches and officials. The team made its base at Rossnowlagh in south Donegal, perhaps not quite
on the route to Rosguill ‘as the crow flies’ for reasons not worth delving into here! Nonetheless, it
was valuable to have the teams all staying together under one roof, to relax, bond and prepare on
the eve of the big day ahead.

On Sunday morning we were greeted with fresh, breezy and occasional showery conditions for the
second part of the trip on the road to Rosapenna. It was timely that the new club tent was making its
debut. It looked like it would certainly be needed! As it turned out, the weather held up quite well,
with some sunshine, infrequent gusts of wind and the showers when they did arrive were mercifully
short. On arrival at the venue, our athletes and crew had the chance to find their bearings and check
out the course, which could be described as one for the speedsters in being quite fast underfoot,
although there were a couple of testing drags of 50 metres or so and tricky sandy sections to
contend with. The course was designed with two loops of 1000m and 1500m respectively to cover
the various race distances ranging from 2000m (U12 juvenile) to 10000m (Senior Men) book-ending
the 10 races across nearly 4 hours of competition. It appeared that the best race tactics would be to
drive off hard, stay out of the rough, avoid the bunkers and ultimately aim for the flags!

Clonliffe had one sole representative in one of the early races: the Under 14’s Girls race over 2000m,
which saw Sophie Kernan achieve a creditable 39 th place in a field of 166. Up front, one could be
forgiven for seeing double, as the Renton twins Freya and Holly from Westport AC powered home
for gold and silver.

Our Under 16 Boys team lined up just before 1pm for the final juvenile race, over 4000m, and
produced an outstanding collective performance to secure National team Silver, and only 11 points
behind Gold (Nenagh Olympic AC). It was a day to remember for these young Harriers, most of all by
Matei Ursachi who stayed in touch with the lead pack throughout the race and when the pace
picked up in the last 1000m, he battled strongly to catch and eventually pass the Ashford AC athlete
in 3 rd and land a fantastic individual bronze medal. His teammate Rory Quill ran strongly to the end,
rewarded with a superb 12 th place followed by our other two scorers Jack Quinn (60 th ) and Aidan
Benjacar (69 th ). Alister Anith (90 th ) and Harry Lynam (99 th ) rounded off matters for the Clonliffe team
who all did the club proud. There was a very popular overall winner of the race, as individual Gold went to Caolan McFadden of the host club, Cranford AC. The cheers as he crossed the finish line
were no doubt heard across the bay at Downings Pier!

The Junior Men’s race (incorporating Under 18) over 6000m treated us to an enthralling battle up-
front between two established young Irish distance-running stars, Dean Casey (Ennis Track AC) and
Nick Griggs (Mid-Ulster AC), with the latter ultimately taking the win, having just too much in the
final sprint downhill to the finish. In a race which saw bouts of sunshine, biting wind, brisk showers
and a rainbow overhead, Clonliffe were led home by Niall Carbery in 33 rd , who ran a well-judged
consistent pace from the gun, Sean Cronin (51 st , 25 th U18) who was prominent in the lead pack in the
first two laps but unfortunately faded in what was just one of those days and not a fair reflection of
his undoubted ability. However, Sean, would find consolation as the next three Harriers home
combined with him to secure a brilliant National U18 Team Silver: Lorcan Benjacar (53 rd , 26 th U18),
Cillian Keegan (70 th , 35 th U18) and Tom Breslin (76 th , 40 th U18). Our remaining Juniors and U18’s flew
down the last sandy slope in following order: Ronan Donohue (78), Oran McGowan (113), Leon
Brady (127), and Jack Woods (129).

The penultimate race of the day saw our Senior Women’s team toe the line in what was probably
the smallest field of the day, numbering less than 90. However, quality made up for the lack of
quantity on this occasion with the front pack including Olympians and European medallists among
their number. The race provided a fascinating match-up between athletes perhaps more vaunted for
their middle-distance track exploits (at least in recent years) against others who are noted for longer
distances up to the marathon. It was the former who prevailed on the zippy Rosapenna turf with
Sarah Healy (UCD) taking a finely judged win over Ciara Mageean (City of Lisburn) in second place,
ahead of Michalle Finn (Leevale) and the well-supported local favourite, Ann-Marie McGlynn
(Letterkenny). Our Clonliffe ladies finished in 9 th place in the team competition, led home by Jen
Elvin (24 th ), Laura Tuite (60 th ), Clodagh Galvin (63 rd ) and final scorer Megan O’Keeffe (74 th ) who judged
her effort well over the 8000m distance and passed several athletes in the 2 nd half of the race.
Following in close quarters for the Harriers were Alannah Cooley (76 th ) and Jenny Johnston (77 th ).

The final race of a terrific Championships was the Senior Men’s over the 7-lap, 10000m distance.
After the disappointment of surrendering our team title last year to an admittedly strong and worthy
DSD AC outfit, our lads were desperate to regain the famous trophy and honour the legacy of our
long-time club captain Joe Cooper, so sadly lost to us in late 2020. Things don’t always go smoothly
and to plan – especially in cross-country racing – and sure enough, matters conspired to throw a
spanner in the works barely one lap into the race as our lead runner and one of the pre-race
favourites, Efrem Gidey got a bit impeded in the throng of bodies, losing a shoe in the process. He
had to stop and re-fit it, while some of his rivals seized the opportunity to push the pace in what
perhaps was an early bid to remove him from the equation. Thankfully Efrem was able to gradually
work his way back to the front of proceedings by the third lap, though it no doubt came at the
expense of some physical and mental energy, not that he showed it! The ensuing laps took the form
of a gradual, slow burn, as the main contenders remained to the fore – Darragh McElhinney, Hiko
Tonosa, Peter Lynch, Killian Kilrehill and Efrem – while others dropped off one by one as their pace
and effort could not be sustained, particularly on the energy-sapping drag up the sandy section
along the back of the course. Behind them, Clonliffe’s Sean O’Leary would have a fine race, holding
position well inside the Top 20. Ian Guiden had started strongly and had Sean in his sights in the
early laps but unfortunately faded a bit over the latter half, however Jayme Rossiter came through
strongly as the race progressed to counter this. Johnny Whan and Stephen Cashin packed well,
however Johnny ran into difficulties late on and sadly didn’t finish. Eoin Pierce and Sergiu Ciobanu
were our “Odd Couple” as a National indoor 1500m champion ran shoulder to shoulder with a
multiple National marathon champion, with the latter’s endurance qualities coming through as he
eventually moved up the field. Indeed, Sergiu would wind up being our 4 th scorer and none of us, not least him, would realise the significance of that until the race was done. The battle for individual
honours at the front of the field eventually boiled down to four contenders in the final lap, with
Efrem still in the mix alongside Tonosa, McElhinney and ‘dark horse’ Lynch. Tonosa made a big move
up the sandy climb at the back of the course, surging ahead, but McElhinney went with him with
Lynch and Efrem not far behind. In what was a thrilling conclusion, McElhinney showed the quickest
heels up the final climb, rounding the final corner in first place which he did not surrender as he
crossed the line for a famous victory. Tonosa followed in 2 nd , Lynch in 3 rd which meant that Efrem
sadly just finished outside the senior medals on this occasion (but picked up U/23 gold) and may have been wondering what might
have been if he had not suffered that early mishap when losing his shoe. The 4 points that he
secured for the team proved crucial however, as little did we realise but the battle for team honours
was in fact incredibly tight, as we took the National title by a mere 3 points in the end, with a total of
86 ahead of East Cork AC’s 89. On top of Efrem’s heroics up front (4 th , 2 nd U23), we had Sean (15 th ),
Jayme (24 th ) and Sergiu (43 rd ) rounding out the scoring quartet. Next into the finishing chute, all only
separated by around 30 seconds, were Ian (51), Stephen (55 th , 14 th U23) and Eoin (60). It showed
once again the importance of working hard and fighting for the team.

The lads had brought the coveted trophy back home, a 35th National. It also meant that once again Clonliffe will proudly take its place at the top table next February to compete in the Euro Champion Clubs Cup (ECCC), to be held in Spain.
So, all in all, a successful National Championships, delivering an individual bronze medal, one team
gold and two team silver performances. The local organising club Cranford AC should be
commended on putting on such a fine event, with a warm Donegal welcome, although we’re
probably safe to assume that the golfers will be glad to get their course back!