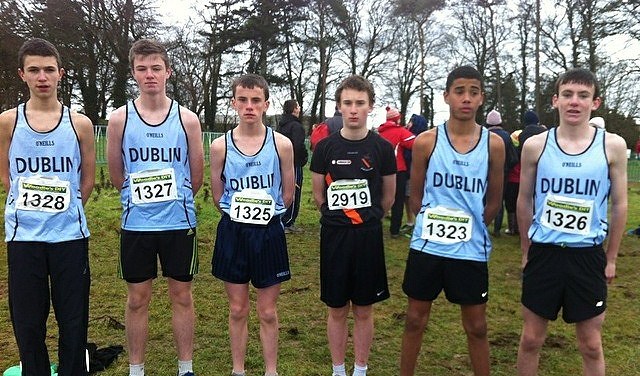 Clonliffe’s U/15 boys were crowned national champions after a stunning win in Adamstown, Co. Wexford on Sunday December 9th. The team headed to Wexford having finished 2nd in the Dublin Cross Country and whilst it was always felt that the lads were more than capable of a medal winning performance to take gold was frankly stunning. The foundations of the win came courtesy of a fantastic run from Adam O’Brien who found the conditions to his liking as he finished in excellent 4th place. Next in came Paddy O’Hanlon with his best race of the year, and what a place to pull one out of the bag, as he finished in 28th place. Another two top class runs then from David O’Hanlon 34th and running his first national Kevin McKenna 37th,  forth  scorer. Sean Carrig had another excellent run finishing in 41st position and young Joseph Hession ran exceptionally well to finish in 67th place, Joseph is an U/14 athlete, in fact he is the Dublin U/14 champion, and was at a major disadvantage in running against athletes a year older than him.

With the hiccup in the results system the result was not known on Sunday. Some of the Clonliffe lads actually headed back to Dublin believe it or believe it not feeling a little disappointed with their individual runs. That disappointment has now changed to elation as it was announced yesterday that the Clonliffe boys are the All Ireland champions on 103 points from DSD on 113 and Beechmount Harriers 116 points.

The juvenile championships were followed then by the National Novice. The Clonliffe men’s team was severely weakened with three of the four scorers who won the Dublin title suffering from injuries and illness. There was, however, a very good run from Fintan Doherty who finished in 47th place leading home Ernie Ramsey 62nd, Clive Ahern 82 and Noumir Bouzain 91st as the team placed 9th on a total of 282 points. The novice title was won by Finn Valley AC from Leevale AC and Togher AC. Other Clonliffe results from a huge field of 193 finishers: Tom Sherlock 95th, Darren Cullen 128th, Tom Frayne 132nd, Johnny Bradley Ward 140th, Joe Phipps 143rd, Conor Keane 145th.

The sole novice woman from the club in Adamstown was Orna McGinley in 54th place.