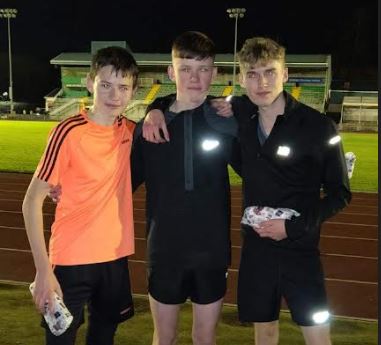 Fogo’s group had their Christmas Eliminator 3000 race in Morton Stadium tonight, deferred from last year. A great turnout by the entire group. The race got underway immediately after the juvenile cakes races (report to follow). The elimination process didn’t start until 600m had been reached but after that as each lap was completed the tail ender was called to shore. Tactics came into play with the man at the back trying to come through on the blind side to catch his rivals out and so it went until with 400 to go there were only three men left standing: Sam Murray, Sean Cronin and Matai Urachi. The youngest of the trio Matai made a bold bid for glory opening a gap but was chased down by the Eliminator Sean Cronin with 60m to go, Matai took 2nd with Sam 3rd. A real fun race. Well done to all concerned.