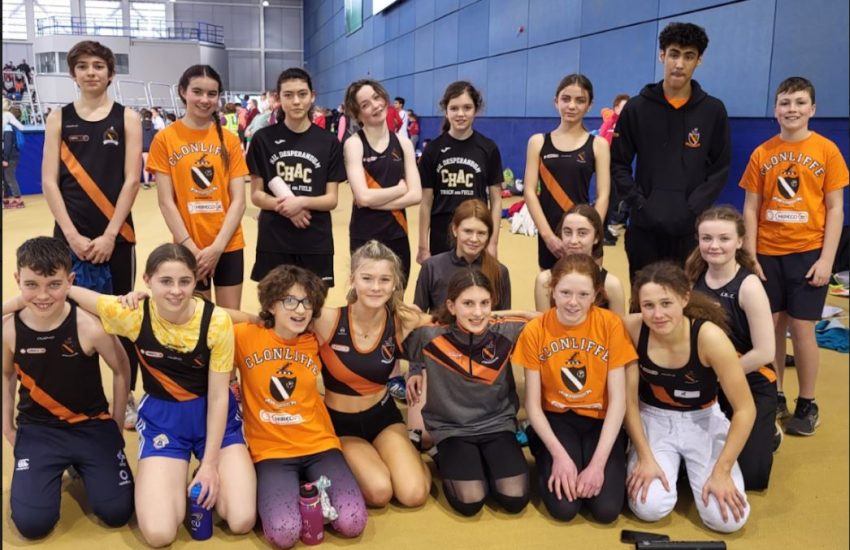 Eugenia Bateson Reports from NIA, Abbotstown: The last two days of the Dublin Indoor Championships was a weekend of experience, team building and some fine runs from the Clonliffe Juveniles over the weekend.

Saturday saw the U14 800m Leah O’Reilly being our only girl.  Leah led the first two laps looking comfortable in her heat but was unfortunate to have run out of steam in the end and not making it through to the final.  Sean Scanlan and Conor Tyan also had fine performances in the U14 Boys 800m but in a tough field all was not lost as they gain great experience which will stand to them as we get back into competition.

Sunday was a day of batons, team work and an electric atmosphere.  The stands were packed, the noise was full of hope, encouragement and great cheer.  Athletics is well and truly back!

The morning saw the Even Age Relays.  Gerry Carr’s U16 girls were up first with two strong teams.    The first team out of Kate Cambell, Emily Jachne, Ava Usanova and Rebecca Walsh ran a spectacular heat and though qualification was based on time look comfortable before the results were in to be through to the final.  Sarah McDonald, Cadhla Nic Fhloinn, Mya O’Reilly and Aedin Ferguson ran their heat also very convincing and were unlucky to have finished 7th in the heats narrowly missing the final.  Clonliffe proved victorious in the Final with a fine win and through to the National Championships.    U16 Boys was a straight final with an unfortunate late pull out meaning that the 2nd team could only run three legs.  Cathal O’Reilly stepped up on the blocks, better known as a cross country man and ran well passing to Charlie Duffy who is just back from injury and to a fine run from Joar Ryan.  A very brave performance from this team that will help them in the track season ahead.  Jaydon Carroll continuing his fine sprint performance gave a strong start to the 2nd team, into Jake Kane, Issac Moss, and Jack McDonald.  This team ran exceptionally well earning themselves a well deserved Bronze Medal and a place in the National Indoor Championships.

U18 Girls finished out the morning session with Nadejda Melega off the blocks into Ciara Scott who had one of her finest runs to date, passing to Cross country girls Clondagh Nic Dohmhnaill and Hazel Kenny.  This team were unlucky to finish 4 in their heat and based on 6 fastest also narrowly missing out on their final.  All the same, not a bad performance from this group running together for the first time.

The afternoon saw the turn of the Uneven ages.  The U15 Boys and Girls took on this event for the first time with two girls’ teams, Aisling Faherty, Harriet Kenny, Sandy Rose Kivlehan and Niamh Cooper on one team and Aedin Ferguson, 2nd run of the day, Hannah Walshe, Sophie Rattigan and Leah O’Reilly.  A great starting point for these young team, showing lots of potential as they learn this new skill of relay running.    The U15 Boys saw Sean Henry into Liam Arthur to Conor Phelan, and a fine performance from new comer and debutant Brooklyn Jackson.   Certainly, lots to come from these boys.

Last of our races in this Championships was the U17 Girls.  Kate Faherty opened the race handing over to Rebecca Walsh, a middle-distance runner who ran a fantastic 200m handing into Sarah McDonnell who showed she is coming back to her fine form and into Hazel Kenny, again more of middle distance taking on this 200m.  Unfortunate not to get through to the final but great to see some fine sprints and ‘speed sessions’ which will come in handy as we approach the track season.

As the rain battered the NIA the Juvenile Championships came to a close. Some great promise shown over the 5 day event, some Gold, Silvers and Bronze medals and some great work by Anne Murray, Mick Fogarty and Gerry Carr’s U14 to U19 athletes.
Nil Desperandum!