The Awards Night kicked off with a 3000 Metres Race, held on the track. The weather was a cool 3 Degrees and the Real Feel was -2. The race team under the directorship of Maurice checked the track prior to the race and it was decided that it could go ahead. The bugle was sounded, giving runners a few moments to ready themselves for the off. Tracksuits, Pullovers, Longjohns and all sorts of warm clothing were shed and everyone was ready to go. The bugle sounded again and we had takeoff – well that’s what we thought; however very quickly if became apparent that the conditions at the home straight had become treacherous. The race team had no option, but to stop the race immediately, to avoid a serious incident. The runners then headed off themselves, taking routes outside the stadium to do there own few miles. Next stop was the clubhouse, where at 9pm the bar was crowded in anticipation of the many awards that were to be presented. The master of ceremonies; Maurice Ahern began by giving a lenghty speech, where he thanked the President; Paddy Marley, Ladies and Mens Captains; Pamela and Joe Cooper, the Grand Prix Committee of Johnny O’Leary, Caroline and Paddy Tuite, Pamela Cooper, Liam Hennessy, Murray Ahern, Gerry Mc Cabe, Noreen Keane and Ben Lawlor, the volunteers; too many to mention; however their efforts were well appreciated during the series, Caroline and Paddy Tuite for their excellent work in running the bar and providing all of us with refreshments after each race. Maurice also thanked the many sponsors, who made the series such a success this year. Maurice also mentioned that the series offer great value at €30 for 16 races and that race sponsors are vital to keep the series alive. We hadn’t met as a group for any prizegiving in some time, so Maurice along with the various race sponsors; Pat Bonass, George Maybury, Richard Connolly and Maurice himself, presented the outstanding prizes.The result of the Horan Cup,held on November 25th last had not been reported due to the fact that the winner, Mick Bermingham was a serious contender for the overall series prize and we had to keep mum over the results to keep the excitement about the winner until the Awards night. The result of The Horan Cup – Race 16/16 – 6 Miles Cross Country – Santry Demesne – 12 Noon – 25th November is as follows;

Maurice then spoke about the series this past year and how well it was received. The club president; Paddy Marley spoke about the commitment shown by Maurice Ahern and the Grand Prix Commitee in making the series such a great success. And so we came to the announcement of the overall winners. Maurice spoke about the  sponsor of the overall winner in the Grand Prix Series; Behan & Associates and in particular Noel Guiden’s dad, who was the co-founder of the series in 2000. Maurice mentioned that the series became most exciting with one race to go and only a scattering of points divided the top three runners. As is the norm, the winners are kept top secret, so the time came to announce the winners in the series for 2017. After 16 Races, run on Track, Trail, Road and Cross Country throughout 2017 the final result of our Grand Prix Series for 2017 is as follows;

Grand Prix 2017 produced the closest finish in the history of the series with only a couple of points dividing the top three places.

Congratulations to Emma Dunne, who is a most worthy Champion. Emma becomes the first lady winner in the 17 year history of the series !!. Emma not only won the series, but she ran personal bests in almost every race and has been the STANDOUT athlete of the series, so well done to a most popular winner Emma.

Well, that’s it – The 2017 edition of the Grand Prix has been the best to date !! We would like to thank everyone who took part in the series and we hope you enjoyed the Awards night. We would like to wish everyone a Happy Christmas and a Very Happy 2018. We hope to update you with dates for Grand Prix 2018 in the new year. In the meantime get training and we shall see you for the next edition of our prized series which begins in the spring. We are open to accepting sponsors for the series in 2018, so if you are in a position to sponsor a race just contact any member of the Grand Prix Committee. 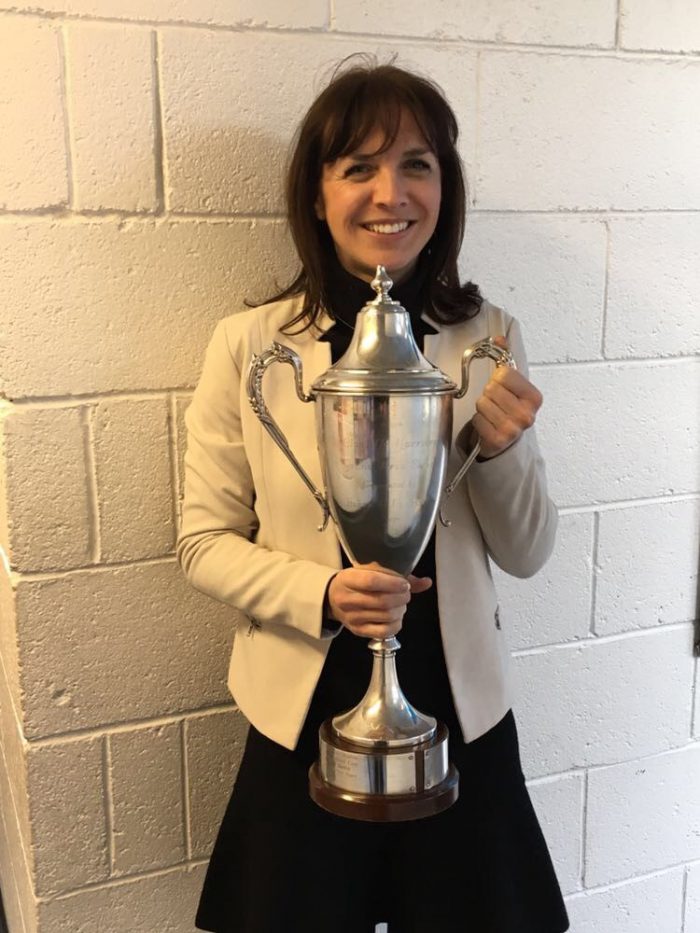