Athletics Ireland today announced the Irish team to compete in the European Indoor Championships in Prague between the 5th and 8th of March.

As expected Dara Kervick, who made a big breakthrough in Athlone over the weekend in running 46.53 is selected for the 400 and is also selected as a member of the 4 x 400 team. Also selected on that 4 x 400 team is Dara’s training partner Timmy Crowe. The 4 x 400 squad includes not only Dara and Timmy but also Paul Murphy (Ferrybank A.C.) and Harry Purcell (Trim A.C.) all of whom are coached by Clonliffe sprints coach John Shields.

The third Clonliffe man selected is Declan Murray in the 800. Declan earned his second international cap having made his debut in the European outdoors in Zurich last summer. 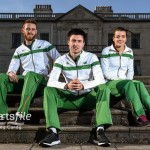