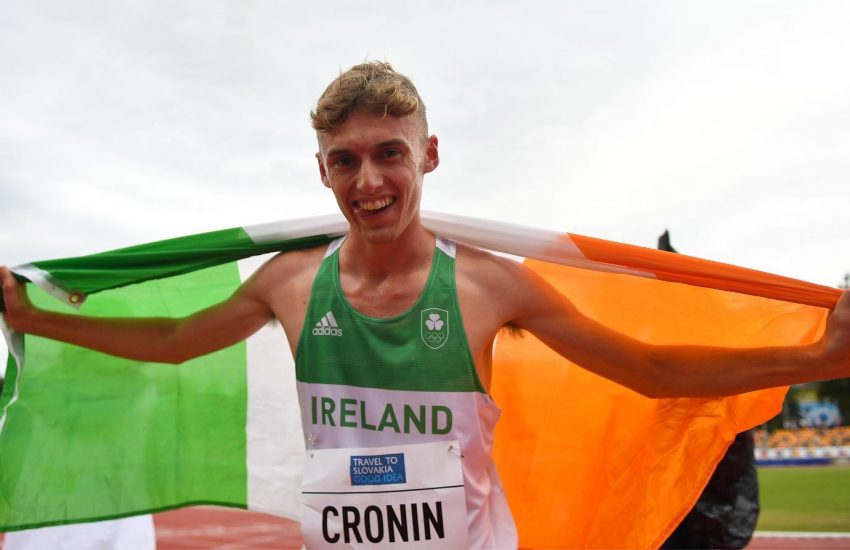 And its a Bronze for Sean in the EYOF Championships in 4.02.81.
Sean Cronin took to the start line in the European Youth Olympic Federation Championships in Slovakia at 5pm this evening.  Sean fought hard for his qualification to earn his place in the Irish team, and that fight training paid off today.
In a messy, scrappy race that never really settled, Sean kept his head and despite pushing and shoving, managed to keep his focus.
In an opening lap of 62 seconds for Sean, a cautious opening followed by two relatively slow laps, the places were constantly switching and changing.  Tension and determination were evident but as always Sean, showed maturity beyond his years, played it cool and clever keeping out of trouble.  He believed in his own race and stuck to it.  At the bell, he moved into 5th place and managed to keep out of trouble to the final bend.  He ran from lane 4 in the final 100m trying to shake the gutsy Spaniard who was keen to keep his medal but Sean was not having it.  He went wide, and finished in an impressive 3rd in this EYOF final with the Hungaria in second and Italian in first.
What can only be described as an impressive track international debut for Sean, a clear sense of so much more to come.  Well done Sean, Mick Fogarty and Seans family who no doubt has some celebrations ahead of them tonight.
Medal ceremony at 19:40 https://eoctv.org/live/

Gladys Cooper, Mick Fogarty, and the whole club would like to congratulate Sean on his fantastic achievement.