The Clonliffe 5 headed to Athlone today for the 3rd and final day of the GloHealth National Juvenile Indoor Championships accompanied by the best supporters in the World Cliona and Amy. On the programme today were 800s and 200s. 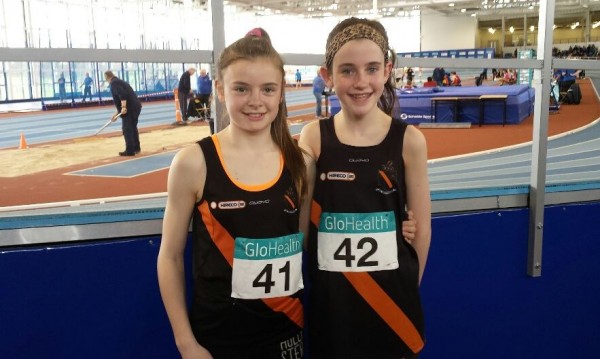 The first of the club`s athletes in action were girls U/14 pairing Rachel Fagan and Amy Hodson both lining up in the 800 final. In a packed field both the Clonliffe girls did very well on this their first ever indoor race both were competitive throughout and impressed with very solid runs placing Amy 6th (2.32.75)  and Rachel 7th (2.33.46).

Next up was Dublin Indoor U/16 champion Lauren Carr who in a word was super. A most mature run by Lauren always in medal contention and with 100 to go was still in that bronze position and was only overhauled on the final bend, but still battled all the way to the line. A fine 4th place and a huge pb of 2.25.24 was just reward for a great run. Unfortunately Craig Giles had a race to forget in the U/16 boys, but will benefit greatly from the experience.

Finally Caitlin O`Reilly, who hasn`t been in full health lately battled away in the U/16 200 and although 2nd in her heat her time of 26.60 was not enough to progress to the final thus bring the indoor season to a close…not to worry the outdoor season is already underway!!