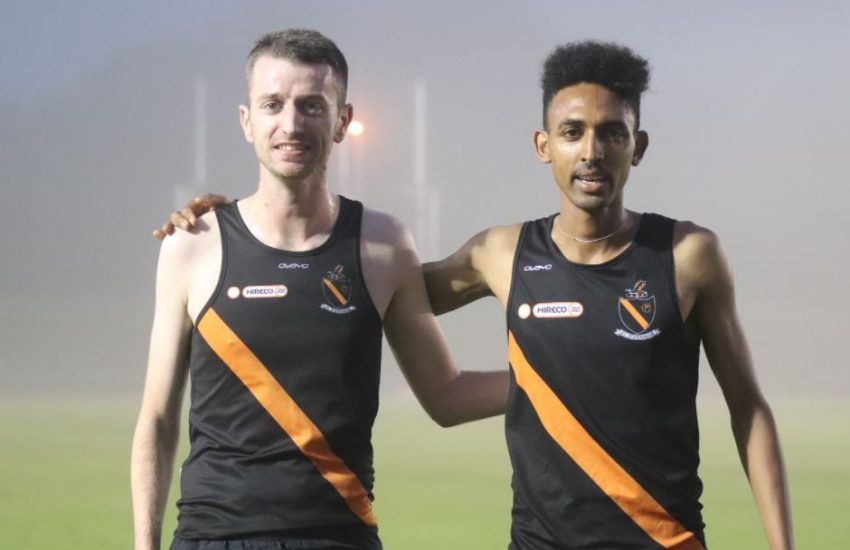 It was a hugely positive night in Morton Stadium for last night’s club 3000 with the return to racing of Efrem Gidey, after recent injury over the summer and Ian Guiden who has endured almost 2 years of injury. Both lined up for the 3000 as fog started to descend on the stadium with the full stadium lights adding to the atmospheric conditions. With, by their standards, a pedestrian 74 second opening lap Ian took over the pacemaking duties quickly dropping in 67/66’s with the mile being reached in 4.37 as the returnees lapped the field. With two laps to go Efrem hit the front with Ian on his shoulder and was only over the last 200 that the deal was sealed with Efrem coming home first in 8.28 with Ian clocking 8.31. Mick McMahon came home in third place in 10.08.

The 3000 B race started bang on time and 8.15 as a thick blanket of fog descended. At the front end of this race Declan Grant led proceedings with Julie Larkin looking extremely comfortable on her toes sitting on Declan shoulder, these two opened the gap on 3rd position Eamonn O’Neill and with 200 to go Julie tore past Declan as she clocked a 36 second the closing 200 to look a very comfortable winner in a time of 11.30 with Declan three seconds in arrears and Eamonn holding onto third in a time of 11.42.

Once again it was a very good club night, thanks as always to our hard-working officials who come out time and time again and to the athletes who once again enjoyed the occasion. Next on the club calendar is the club 10,000 championship for the Bonass Trophy for men and the Bonass Cup for the women’s champion. This race takes place on Thursday, September 23 with entry opening on September 16.