Round 2 of the Clonliffe Harriers Grand Prix Series took place on the track in the Morton Stadium last night. The McDonald Cup is one of the historic Clonliffe Club Races dating all the way back to 1907. The original version of the race took place some 107 years ago in Clonee, County Dublin a 4 mile “flat” race for a cup presented by Mr. JJ McDonald and was won by J. Ironmonger, the 2014 version is now one of the early season Grand Prix Races and takes place, again over 4 miles, but on the track. Last nights keenly contested event was won by Aimee Ahern, winning her first club race for sometime. The presentation took place in the club bar, last night was the 40th anniversary of the night Clonliffe first opened it`s original bar (April 17th 1974). 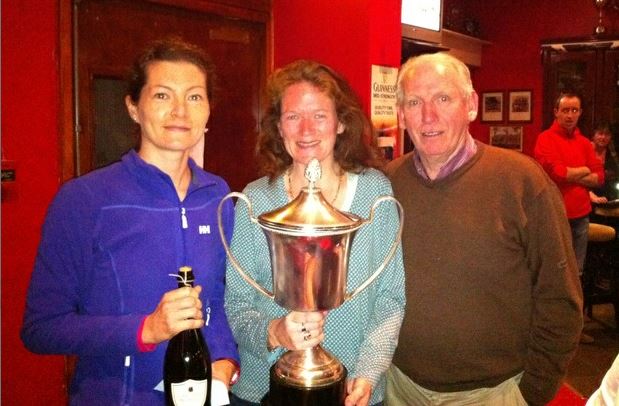 The race attracted an impressive turn out of athletes for the 16 lapper on a fine night for a race. In a first for a Grand Prix Series race there was use of the electronic clock, a most welcome development. There were  no less than 44 finishers lead home by prolific racer Tom Sherlock (22.11), after a great race with Sean Doran, who ran a 4.59 mile on Tuesday in the ALSSA series, and Ernie Ramsey, who finished 1, 2, 3 “on the road”.

The McDonald Cup itself is a handicap race and was won by Aimee Ahern, 2nd winner of the Grand Prix Series from a couple of years ago, Claud McMenamon and 3rd Dave Murtagh. Many thanks to race sponsors The Wisdom family,  Trevor and Rachel.