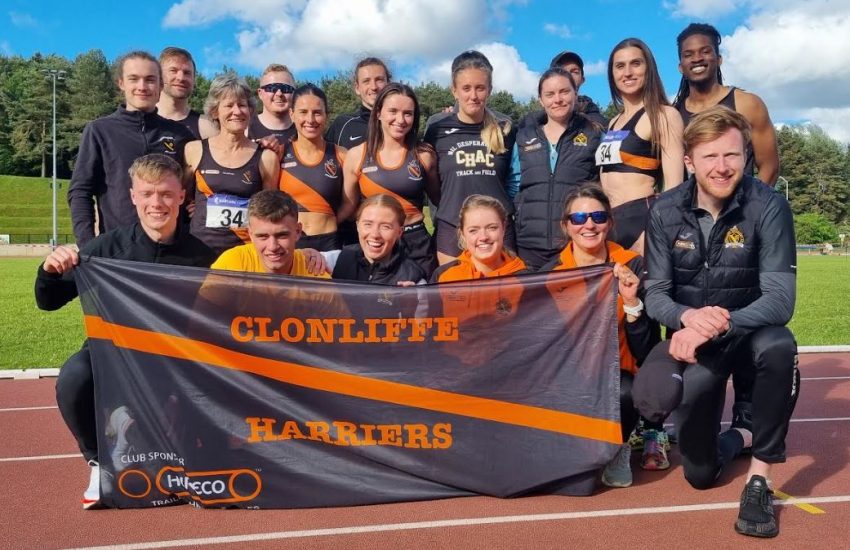 The 2022 national track and field league got underway yesterday. The Clonliffe teams headed north to the Mary Peters track in Belfast where the men faced DSD, Crusaders, Finn Valley, Ratoath AC and Kildare County. The women’s team were up against Finn Valley, DSD, Sligo County, Kildare County, Meath County, Louth County and Monaghan. It proved to be a very positive start to the league indeed by both teams and at the end of a long day the men’s team topped the standings in this particular group and the women’s team were sitting in an excellent 3rd position.

The men’s team really produced the goods with wins on the track by Leo Morgan in the 100 in 10.81, Daniel Lacey, the fastest barman in the West, flying over the hurdles in the 400 H (62.23), Niall Carbery who almost packed a season’s work of races into this week, gathered maximum points in the 3000 steeplechase in a new PB of 10.10.99. The relay squads also contributed maximum points, the 4 x 100 team of Kenji Miyachi, Keith Pike, Keith Marks and Leo Morgan crossing the line in 43.13 and the 4 x 400 team of Elie Nayrand, Rolus Olusa, Keith Pike and Daniel Lacey clocking 3.28.90. In the throws the club’s strength once again was evident, Eoin Sheridan contributing a winning double of discus (51.31) and shot (13.90). Rory Gunning in the javelin, although not officially on the results as of yet, took maximum points in that event. Simon Galligan also contributed double maximum points winning the hammer (59.73) and the WFD (4.82). In the jumps Keith Marks won the long jump with a best of 7.05 and was 2nd in the high jump at 1.75. Rolus Olusa took the triple jump 9 points on offer with a best of 13.54.

The points standings currently show Clonliffe men 1st and 146 with DSD 2nd on 110 (results were seem to be incomplete).

Round 2 takes place some way down the line – July 31, venue to be announced in due course.