Clonliffe 400 club record holder and European finalist Brian Gregan scorched around two laps of the fantastic Indoor track at Athlone IT at today`s AAI Indoor Games to win in 46.07. A phenomenal time: qualification for the European Indoors by over a second, the fastest indoor 400 in Europe this season, and 2nd fastest in the world, the fastest indoor 400 ran in Ireland for seven years and of course a new indoor PB. Brian was out of the blocks fast with an opening 400 of 21.9 and then cruised the second lap for the performance of the day. Unbelieveable!! 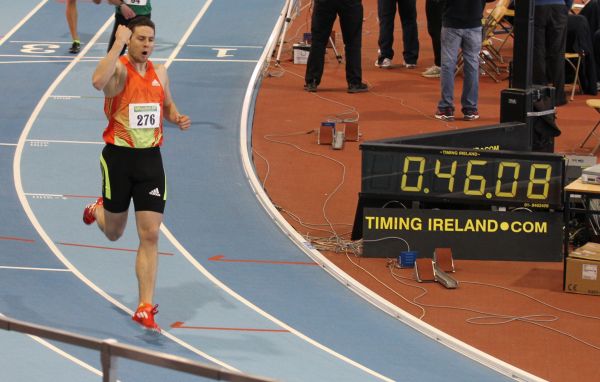 In the field events Andrew Heney had an excellent day winning the high jump with a jump of 2.00m. Dave Donegan won the pole vault with a best of 4.62m with Ian Rogers 2nd (4.40m).

Matt Field was also in indoor action this weekend running 8.19 over the 60m hurdles a mere 1/100th off his pb.

Across the Atlantic David Flynn was running for Arkansas in the Razorbacks Invitational Indoor Meet at Arkansas University on Saturday. Flynner was 16th in the Mile in 4.19.13.