A day of heroic performances in Tullamore at yesterday’s Woodies DIY National Interclub Cross Country as Sergiu Ciobanu took his first individual National Cross Country Title and in the process led the Clonliffe men’s team to an emphatic victory. 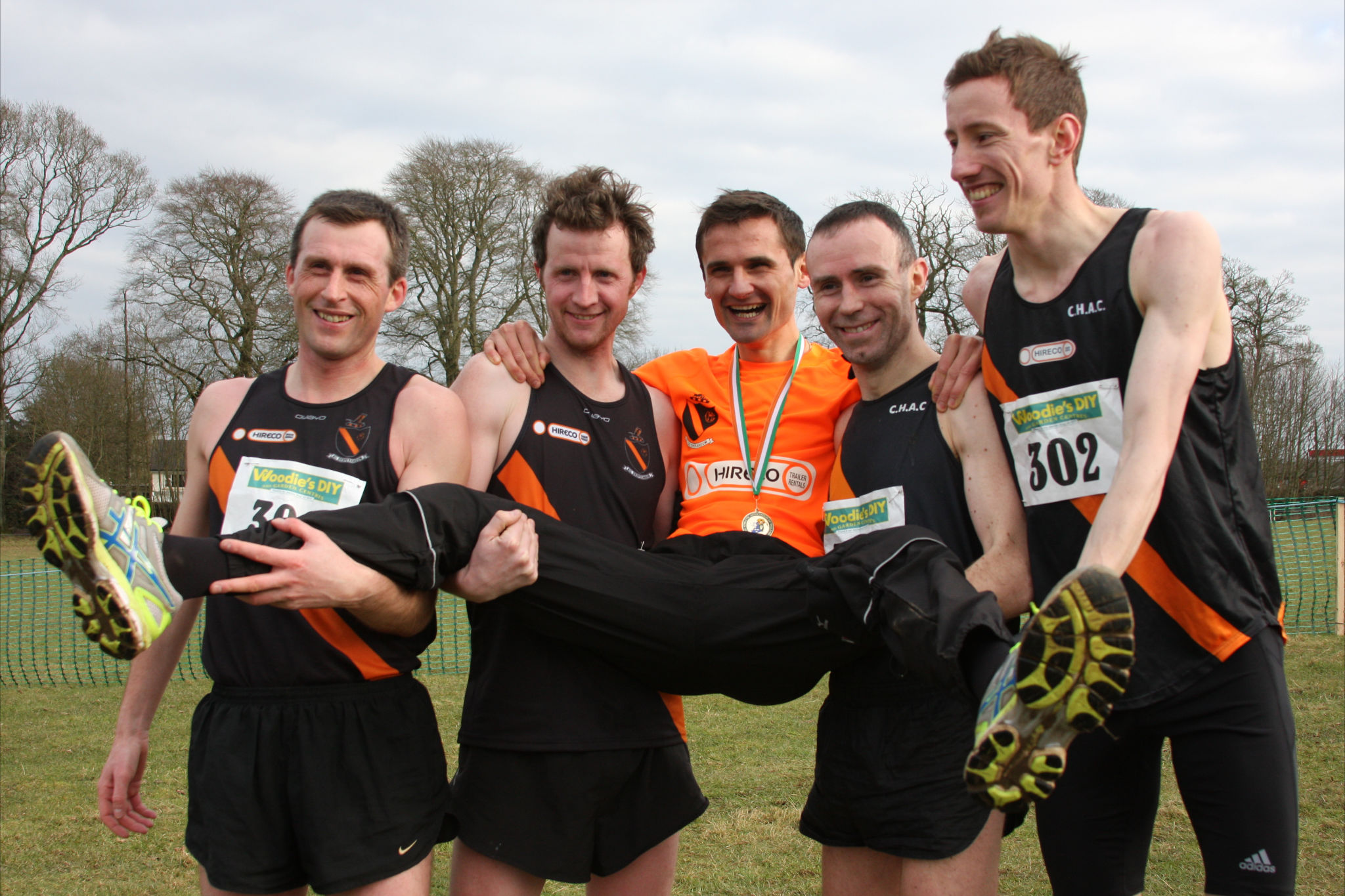 With the news the previous evening of Mark Kenneally’s forced withdrawal from the team due to injury there were undoubted concerns. Kenneally’s absence, however, had the effect of galvanising the squad and as the saying (almost) goes: “cometh the hour, cometh the men” and men this team indeed are. Sergiu took the race by the scruff of the neck in that determined way of his with a tremendous display of front running tactics, indeed Sergiu in all probability led for 11,000 of the 12,000 metre race. From the off Sergiu was at the front of proceedings driving on the pace. After a couple of laps the lead group was down to Sergiu, Mick Clohessy of Raheny, Rathfarnham’s Eoin Flynn and Joe McAllister (St. Malachy’s). By halfway Sergiu’s relentless pace had whittled the pack down completely with only McAllister sticking the pace. McAllister hung on grimly and it was only over the last lap that victory was assured as Sergiu began to open a gap and in the finishing straight he had the best part of a ten second lead becoming the thirteenth Clonliffe man to win the National. A fitting reward for a true Clonliffe club man.

Behind Sergiu the rest of the team were inspired. Michael MacDiarmada running in only his second National ran the race of his life getting himself into a superb position early on in the race and then doggedly holding that position to finish second man in eighth position. Three places behind was another hero David Flynn who only arrived back in Ireland late on Friday after a disrupted flight from the US. Flynner ran an exceptionally mature race holding back at the start and then steadily working himself through the field to finish a superb 11th.

Next in was our man Gary. Once again Gary O’Hanlon stepped up to the mark to be a scorer for the third time on a Clonliffe National winning team with an 16th place finish.

The scoring four were excellently backed up by John Heneghan who placed 20th after a determined run with Pat Davoren running his first race in the Clonliffe singlet in 54th place.

With an overall points total of 36 the Clonliffe men were comfortably ahead of Raheny on 57 points and Rathfarnham on 80.

The first race in the Charleville Estate, Tullamore was the Junior Women’s race where a young Clonliffe team, four of the athletes were running their first Junior race, performed superbly to win team bronze. This bronze medal winning performance came as a result of some excellent packing by the girls who were led home by Roisin Leahy in 12th place. Roisin was chased all the way home by Hope Saunders who was a revelation in this race running strongly particularly over the second lap to make up maybe the best part of ten places on that lap. Next in was Laura Tuite in 19th place with Stephanie McCaul 21st just out-sprinting Greta Streinyte on the run in and Sally Ahern 26th.

The Clonliffe girls had a team total of 65 enough to secure magnificent National bronze for the girls behind DSD 1st and DCH 2nd.

The Junior Men’s team were also hit with bad luck on the eve of the race with the forced withdrawal of Aaron Hanlon due to illness. From the starters gun Ian Guiden was well in the hunt particularly over the first half where he, pre-race favourite Sean Tobin (Clonmel) and Hugh Armstrong (Ballina) led the field and broke away. Halfway through the second 2000 metre lap Tobin increased the pace as Ian hit a bad patch and dropped to third, however, he rallied over the final lap and finished strongly to hold on to that precious bronze medal. Cathal Doyle had an excellent race in his first Junior cross country start working himself nicely through the field and running himself to a near state of collapse to finish an excellent 17th. Owen McCullough was next home for Clonliffe in 23rd place with Liam Ashton two places behind in 25th. On the team result the Clonliffe lads placed 3rd on 68 points behind DSD 38, St. Malachy’s 49. There were excellent first National performances in this race also from Brian Flanagan who placed 31st, Ross Carney 34th and Niall Norman 36th. This is a young Clonliffe Junior team, Ian Guiden and Eoin McCullough the only ones who move on to the senior ranks next year and the team as a whole will benefit enormously from the experience and can look forward with some confidence to next years Nationals.

The Senior women also did the business in Tullamore to bag another set of team medals as the girls placed 3rd in a race which was dominated up front by Mary Cullen who had an emphatic win over Linda Byrne. Of the Clonliffe girls Sara McCormack finished just out of the individual medals in 4th place another good run also by Ailish Malone who placed 19th and Eleanor Alexander, more noted nowadays as a track runner, however, not being out of place on the country in 21st place and Emma Cooper was the 4th scorer in 24th place. Fionnuala Doherty once again put in a very solid shift in the Nationals to place 46th.

In all a superb day for Clonliffe Harriers with all four teams winning team medals, the men successfully retaining the National to win the 9th of the last ten, an individual bronze medal in the Junior men’s race for Ian Guiden and the icing on the cake the National Cross Country title for the Clonliffe Harrier of the year Sergiu Ciobanu.