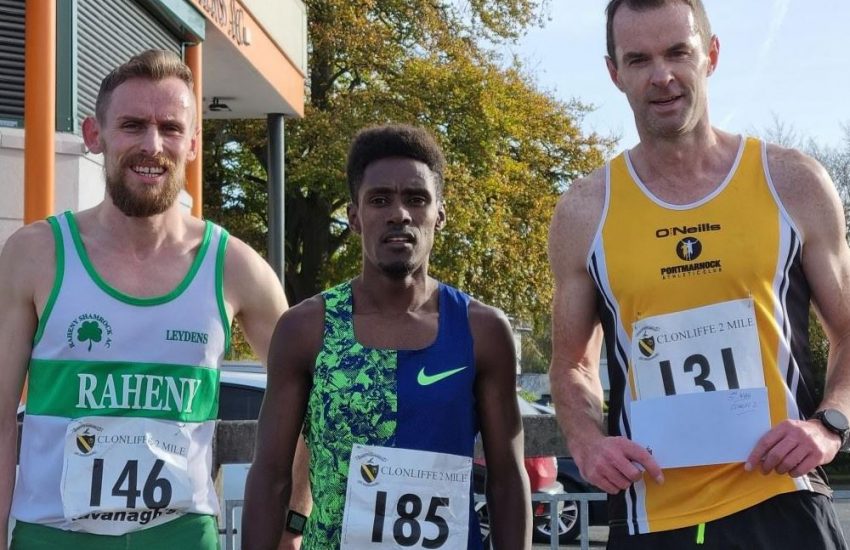 It was a fantastic morning in Santry for today’s 130th Clonliffe 2. The morning dawned bright and fair, fantastic autumnal sunshine enhancing the autumn colours of Santry Park, little or no breeze and the biggest numbers participating in the Clonliffe 2 to date. The atmosphere was super friendly, enhanced by the 50 or so young Clonliffe juvenile athletes taking part in the race suitably attired in their orange Clonliffe Harriers T-shirts. To add to the occasion was a top-class field including Tokyo Olympian Michelle Finn (Leevale AC), para Olympian and European para games gold medallist Greta Streimyte (Clonliffe), international athlete Iseult O’Donnell (Raheny) and on the men’s side Hiko Tonosa (DSD), Garry Campbell (Dunleer) and Kieran Kelly (Raheny) all adding up to what promised to be a very special Clonliffe 2.

The Clonliffe 2 has been sponsored and supported for the past 35 years by the Kavanagh family of John Kavanagh’s ‘the gravediggers’, it was great to have both Kathleen Kavanagh and Niall Kavanagh in Santry for the morning. The race has a long history going all the way back to the first in 1891 and its continued on an annual basis until then. The current version starts on the track before heading out into Santry turning back into the beautiful Santry Park, formerly of course Santry Demesne before finishing back on the track at the Clonliffe clubhouse.

The race started bang on time with the prerace favourites at the head of the field, heading out in to Santry from the stadium Hiko led from Garry Campbell and Kieran Kelly, as this trio led the field out there was a long procession of athletes spread around the entire 400 m a fantastic site! At the mile marker Hiko had already made his move and led by an ever-growing lead, he then led into the stadium and had a lead of all of 100 m before second-place man Kieran Kelly hit the track, the had been a change in third place as Jamie Gahan (Portmarnock) was next in. At the finish line the clock stopped in a lightning fast 8.54, the fastest Clonliffe 2 since 2012 and a new course record.

Michelle Finn was the class of the field in the women’s section taking a fine win in a time of 10.03, second place went to Raheny’s Iseult O’Donnell with Jen Elvin (Finn Valley) a battling third place having come into the stadium in fourth.

Throughout the entire field there were fantastic performances by all right down to the final finisher a young lady who finished with her mother to the applause of the entire army of stewards. It was a very special Clonliffe 2. Congratulations to all the athletes and runners who took part, to all the officials who came out, in particular special congratulations to Mick Kearney, the race director, a huge thank you to Kathleen and Niall Kavanagh and the entire Kavanagh family, thanks also to the gardai and to Morton Stadium.