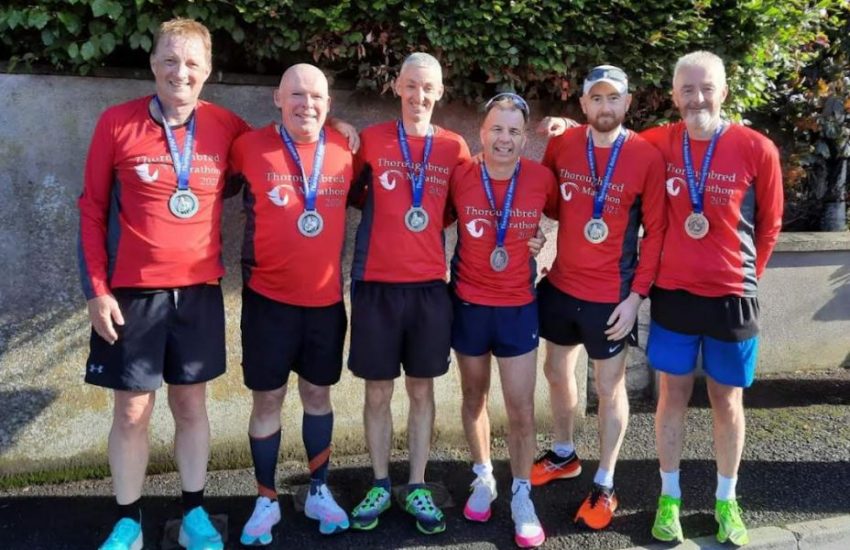 Mo McCrohan reports: Thoroughbred Autumn Marathon Kildare 24th October 2021.
After 18 months a year of virtual races and leagues, a further notch on the
bedpost of normality was to run an Actual real marathon.
I do not know the history of this event, but it was a shrewd move on the
organiser’s part to schedule the race for Dublin marathon weekend. for this
year.
The restrictions when event registration went live capped the event of 500
participants.
A further nod to the current COVID restriction was such that Kildare village was
so sleepy on a late October dawn morning that there was no signs or clues to
an event taking place other than the huddled groups of athletes trying to keep
warm in the village!
It was the opposite of my Galway parking trauma that I fell upon a perfect car
park in terms of proximity to the start of the race, though 1 hour before the
race, I did not know where that was?
Alan Worrell happened to be passing my car, so he put his gear in my boot not
content with running one marathon on the day; he had also entered the Dublin
virtual!
About 15 minutes pre start the PA system got going and an announcement
made directing us to the start area a short walk way.
So way we went on the button at 9, down country roads and up a few hills. The
limited numbers meant we got stretched out quite early on .It was to mentally
tough as there were many stretches without any spectators other than excited
guard dogs protecting the large estates of the Kildare horsey set!
It was a little wet and slippery under foot at times. I found the first 3 miles
tough settled down for the next 6 and then from miles 9 -14 went through
angst, running backwards not able to step up.
I was close to quitting, but there were no shuttle buses or anyone around to
get me to the finish.
My lack of speed work (or age?)Showed up, but at 14 I started the mental
gymnastics that gets me though the dead miles 14-20! I have 12 to go or 8 and
a park run and I can manage those..!
Then just before 15 Clonliffe support team arrived in the form of Scott and
Stephen on scooters. If they had been in Stephen’s “Ink mobile “, I think I
would have jumped in the back!
Scott had caffeine gels and water and maybe it was that Dumbo nose peg
thing, but the sluggishness started to recede and my pace upped albeit from a
low base!
I targeted and reined in a group ahead of me and that’s when the benefits of
my long runs started to kick in. The mental gymnastics continued. ..8 to go
that’s 5 and a park run.7 4 and a park run etc.
The scenery improved as we ran through the Curragh on what was a glorious
sunny autumn day.
I had to dodge a few sheep on their walk about, but the last few miles I was in
the zone of passing runners and was only passed by one runner at mile 24!
Mile 25 passed and it was a long straight stretch for home. The Clonliffe
colleagues who had finished waited around to cheer me home, No one, Lilo
and Stitch style was to be left behind!
All 6 of us made it to the finish, though I am not sure of Al Worrell’s virtual app
worked?
.Post-race we were given a sticker for a food voucher. In keeping with the low
key nature of the event, we did not have a clue where to find the food outlet!
Finally ,we did and perhaps it had to be small due to COVID, but the menu of
chicken curry and rice or rice and chicken curry was a little restrictive!,
I finished in a reasonable 3.34, and would like to see my splits as I think it was
even if not a negative split…
The event was well run, but it is mentally tough running in small numbers with
no one out cheering for miles. It was largely flat, but there were some inclines
and rolling hills as befits the country terrain. Plaudits to Dermot Faughan for
getting a 2.. in these conditions
I ll take a short break now and plan next year!
Maurice “Mo” McCrohan