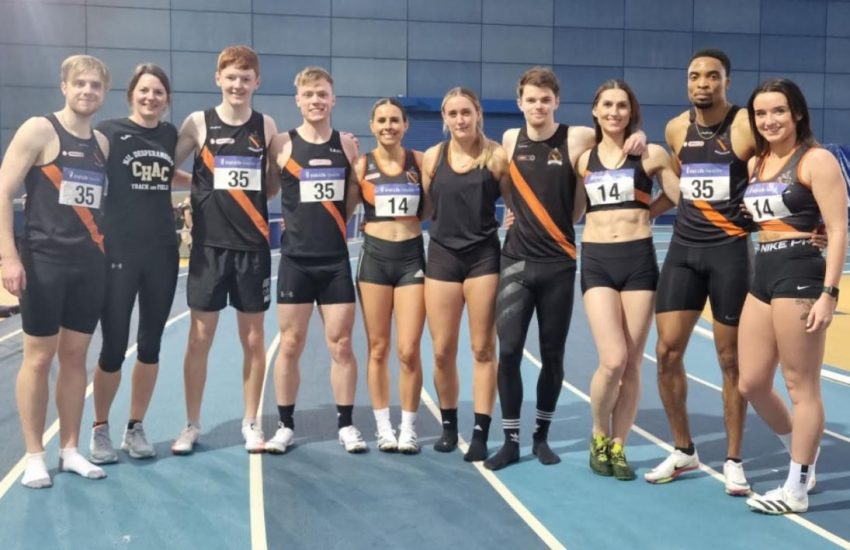 The Clonliffe men and women’s track and field squads were in action in the national indoor league final at the NIA Abbottstown. From the men’s teams perspective it was a bit of a disappointing day as the team finished in bronze medal position relinquishing the title which had been won five times in a row (of course the competition did not take place in 2021). From the women’s team it was a promising performance with the team placing just outside of the medals in fourth place and certainly is something to build on for the future.

Starting off with the men’s team, on the track there were wins for Leo Morgan in the 60 and in the 1500 by Jonny Whan. Second places were taken in the 200 by Chris Sibanda and François Coroller in the 400. Mark McDonald was fourth in the 800 and Rolus Olusa was 3rd in the 60 H and in the triple jump. The 4 x 200 team of Keith Pike, James McDonnell, Keith Marks and Chris Sibanda placed third. In the field events Simon Galligan was fourth in the WFD and fifth in the shot, Keith Marks was third in the long jump, unfortunately due to a timetable mixup Eamon Fahey ended up n/h in the high jump, likewise unfortunately Rolus ended up in the same position in the pole vault.

The women’s team performed very well indeed securing maximum points courtesy of Snezana Bechtina in the pole vault and then solid pointscoring throughout the day: Leah Bergin third in the 400, Lauren Carr in the 200, Greta Streimikyte third in the 1500, in the 4 x 200 relay ( Snezana, Leah, Lauren, Anna) placed third, Alannah Cooley was sixth in the 800, likewise Anna Heavey was sixth in the 60 and Snezana likewise was sixth in the 60 H. Jenny Johnston played a real captains role, not only in getting the team out but also placing third in the shot put and fourth in the WFD. Edel Maguire also put in a strong shift placing 6th in the high jump and long jump. Snezana competed in a total of four events, the PV, triple jump, 60H and relay.

Congratulations to Leevale AC on achieving an excellent men and women’s double today.