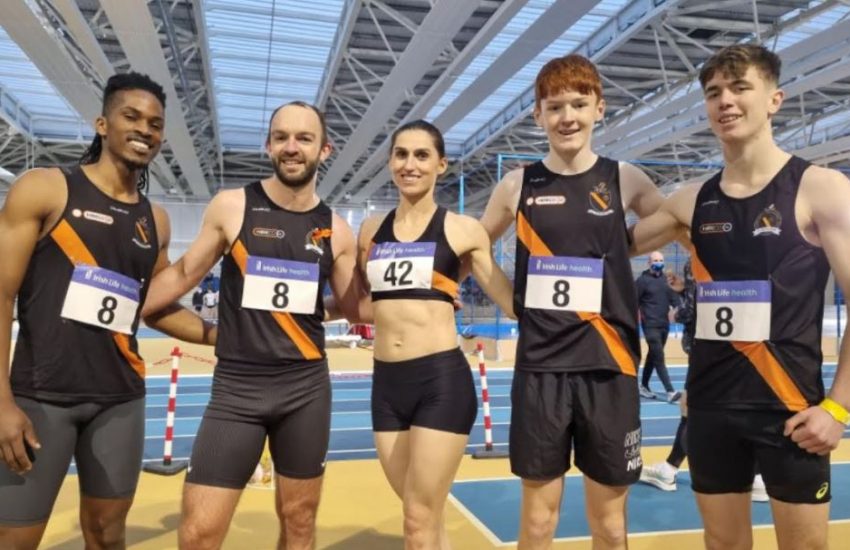 With one half of the club out in Raheny for the Masters cross country the second half spent the day at the NIA in Abbottstown for round one of the national indoor league. At the end of a long day both the men and women’s teams are very much in contention for qualification for the league final in mid-February. The men finished in second place out of the 13 teams entered on 66 points behind Leevale while the women ended the day fourth out of 12 teams with Leevale again topping the charts.

Leo Morgan was in fine form in the 60, the league race he scored maximum points taking the win in 6.86, later in the afternoon he ran in the guest 60 where he ran a lightning fast 6.81, a new PB, placing 3rd and now very much has Jeremy Phillips club record in his sights. Rolus Olusa in the pole vault went over at 4.40, equalling his PB to take second place. Second place also in the shot for Eoin Sheridan (13.35). Eamonn Fahey completed well in the long jump finishing fifth with a best of 6.25. Keith Pike filled in in the 200 placing third in his heat in a time of 23.30. Young Darren O’Dwyer ran in the 800 placing sixth in his heat (2.03.99). In the 4 x 400 relay the Clonliffe Quartet of Rolus Olusa, James McDonnell, making his senior debut, Darren O’Dwyer and Mark McDonald put in a gutsy performance to finish second in their heat and third overall in a time of 3.35.43.

The Clonliffe women also performed very well today, Leah Bergin was second in her 60 heat (8.17), likewise Lauren Carr was second in her 200 heat (26.52). Sarah Bateson in the 800 was fourth in her heat (2.26.30). In the field events Choimhe Morris chipped into the cause finishing second in the shot put (7.68), Snezana Bechtina was fourth in the pole vault (1.70) and young Natalia Gill was 11th in the long jump (4.09). Finally the 4 x 400 relay team of Snezana, Leah Bergin, Lauren Carr and Hannah Browne performed very well finishing second in their heat and third overall (4.07.41).

Onwards and upwards now to round two in Athlone on January 23rd.