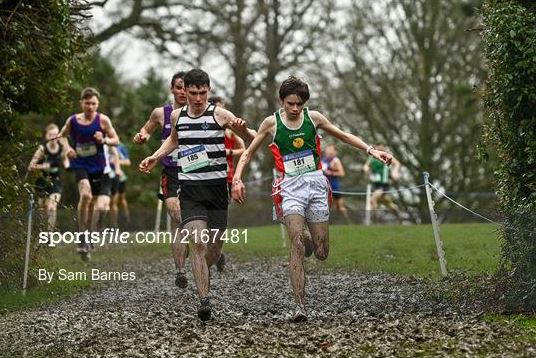 Clonliffe hosted the Irish life Leinster schools cross country championships in Santry Park today. To say the conditions were challenging is an understatement. And it was equally challenging for the Clonliffe people who were there from 8 AM in the morning until around 4 PM in the afternoon. As the threatened storm became a reality with the rain and wind whipping up, the underfoot conditions as a result of a fair bit of rain of late were treacherous. Great credit must go to the young athletes who simply got on with things, there are a total of eight races from minor up to senior. The latter senior races on health and safety grounds were reduced by the organisers from the original distance as the wind got even stronger and the old Santry trees began to creak and bend.

At stake for the athletes were not only Leinster titles but qualification for the all Ireland schools cross country in Mulusk on March 5. From a Clonliffe perspective from the inter-boys race, the St Aidan’s team, made up of Clonliffe athletes Sam Murray, Thomas Breslin, Rory Quill and Devan Morrisey finished third and continue their journey to the all Ireland’s. Likewise in the senior race on the Ard Scoil Ris team that took silver Clonliffe’s Niall Carbery, 8th, and Ronan Donohue, 36th, likewise will head north the first weekend in March. Apologies if any other Clonliffe qualifiers have been missed. Full results from today’s championships can be found on popupraces.ie. Sportsfile photos can be view and purchased from https://www.sportsfile.com/more-images/2202092/5000/

Finally a huge thank you to the Clonliffe crew for their outstanding work today in difficult conditions handled as always with great professionalism and humour – including of course Ben Lawler’s “Comedy Hour(s)”.