The ECCC group B track and field competition this weekend in Tampere, Finland produced the second best ever finish by a Clonliffe men’s team at a European Championships. The Clonliffe men finished in a very credible in the fourth position. Although in 2017 the men’s team finished third in this particular group there is no doubt that the competition faced by the team over the weekend was much deeper than that of two years ago. A travelling party including officials of 27 travelled to the competition arriving in Tempere via Helsinki after a three-hour flight and the two hour coach journey. The optimism of nice weather and the chance for, the officials in any event, to bear their legs in shorts proved ill founded as the thermometer never rose above 10° and all were treated to fairly incessant rain over the course of the entire weekend. 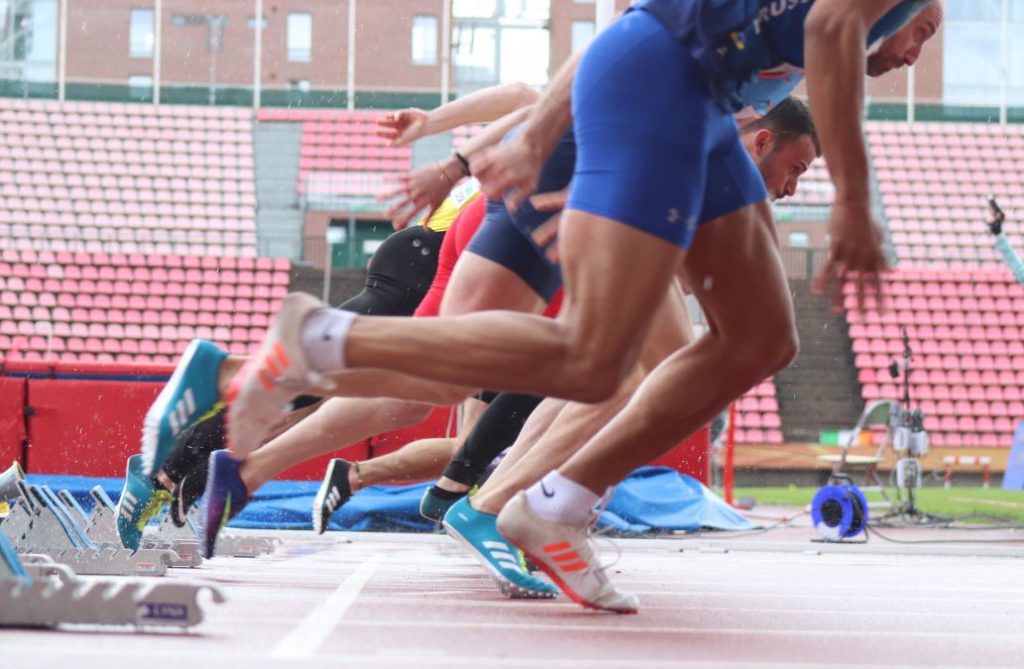 The action on Saturday got underway bright and early, group B is a one-day competition and it is a long day spanning all of nine hours plus. Things unfortunately got off to a pretty miserable start. Chris Sibanda, who was using the guest 100 to warmup for his 200 in the European competition a couple of hours later, got off to a great start but at 60 m his hamstring exploded putting an end to his competition before most of his teammates had even arrived at the stadium. After medical treatment Chris returned to watch the rest of the day’s proceedings from the stand and to cheer on his Clonliffe teammates. Almost immediately however the rollercoaster was back on the up as Simon Galligan produced an outstanding mature performance in the hammer competition getting a good banker throw in from the word go and after that extended his distance on each subsequent event, Simon was rewarded with a superb second place finish courtesy of a 58.47m throw. Simon’s best was only some 7cm off first place.

Timmy Crowe finished third in his 400 H heat and as the two heat results were amalgamated he ended placing sixth overall. Cathal Doyle ran very well indeed in the 800 getting into the mix from the word go and holding on determinedly to 4th place in 1.53.26.

Solid points scoring also in the shot courtesy of Luke Mangan’s 13.72m to take sixth place. Unfortunately things did not work out so well in the 200, with Chris Sibanda already sidelined Luke Lennon Ford stepped into the fray, running in the heat one Luke finished fifth in the time of 22.48 and ended up in 9th place when the two results were combined. Luke took it on the chin and was determined to make up for a disappointing race in the 4 x 400 that evening. 9th also in the high jump for Eamonn Fahey with a best of 1.75m . Likewise Niall Counihan was disappointed with his performance in the triple jump as he finished in 8th place overall as result of his 13.33 opening jump. The discus competition did not go so well for Matt Jarvis who placed 8th with a best of 31.03.

Things then improved once again with Dara Kervick running very well in the 400 running heat 1 Dara finished second in 48.40 as the weather started to worsen with rain now fairly well drowning all and sundry. On the combined heats and Dara placed 4th.

Leo Morgan had a fine run in the men’s 100 in heat one he finished in second place in 11.18, heat two was the faster and Leo ended up also placing 4th overall. Sean Carrigg ran 10.16.45 in the 3000 steeplechase enough to claim fifth place after a battling performance from the young man.

Things then again hit a bit of a downer (told you it was a roller coaster!) as Rolus Olusa sustained an injury on his first pole vault attempt and could not take any further part in the pole vault competition. Rolus will get the opportunity later in the day to put things to rights as indeed he did in the 110 hurdles winning heat one in a time of 15.20 and fifth place overall.

On then to the 5000 where Ian Guiden had a solid run, with the first three , including European marathon champion Koen Naert up and away and Ian led the chasing pack and was just out kicked for fourth place down the home straight as he ran a time of 14.53.13, some nine seconds off his PB set the previous week. Colm Rooney put in one of the great battling performances of the day. With the opening pace pedestrian Colm hit the front after 100 and drove the race on, indeed he led this race on no less than three separate occasions including leading into the bell lap and he battled away to hold off the entire field, almost successfully so,as he was only overtaken with about 120 to go and in a blanket finish ended up fourth in 3.55.04.

While all this was taking place, Stephen Rice was competing in the javelin, unfortunately Stephen was somewhat below his best finishing in 5th place with a best of 61.03m.

On then to the long jump and the dizzy heights! Keith Marks was just superb. A good opening jump and then better and better always in the top 3 and with his final magnificent leap of 7.40m he went from 2nd to top of the pile. First place Keith Marks!

This brought us on then to the relays where things remained on the up. At this stage the rain was hopping off the track. The 4 x 100 team of Leo Morgan, Keith Marks, Eamonn Fahey and Keith Pike were excellent winning heat 2 in a time of 41.55, heat 1 was quicker but only marginally so and the team finished in second place. The final race of the day was the 4 x 400 relay where again an excellent team performance from young Thomas Pitkin, Luke Lennon-Ford, Dara Kervick and Timmy Crowe saw the team power home to win heat 2 (final race of a long programme) with an excellent time of 3.16.11 enough to take an excellent third place once the two heats were combined.

The final scoring is had the crack Belgian team of RESC in 1st place on 151 points from AD Mass Ljublana (SLO) on 134.5, Maccabi Tel-Aviv (ISR) were 3rd on 130 points and Clonliffe Harriers 4th on 107 points leaving behind them the Serbian team, Swiss team, Italian team, Finnish team, Luxembourg team and Slovakian team. So the roller coaster ride was finished, and what a ride!