The Clonliffe Grand Prix circuit moved to the grounds of Malahide Castle this evening for the latest round of the 2014 series. Once again a terrific turnout of athletes with no less than 60 finishers. This two and a half mile race was for the 20th successive year sponsored by Eugene McCarrick with the winner being presented with the famed McCarrick “Malahide Mafia” Plate.

The race is an open handicap, meaning that the runners set off individually slowest first right back to the scratch man. It was a fine night for a race, with the earlier afternoon rain well gone and a very welcomed loop on the trails/tarmac through the trees of the Castle grounds.

At the finish first across the line and winner of the Plate was Caitriona Shanhan, 2nd Laura Kiernan and in 3rd, and making it a ladies clean sweep, Ciara Miley. Fastest man was not on this occasion Tom Sherlock! Rather Sean Doran with a very good run around the twists and bends in a nippy 13.32. There was a tie between Rachel Wisdom and Bernadette Kiernan at 15.15 for fastest woman. 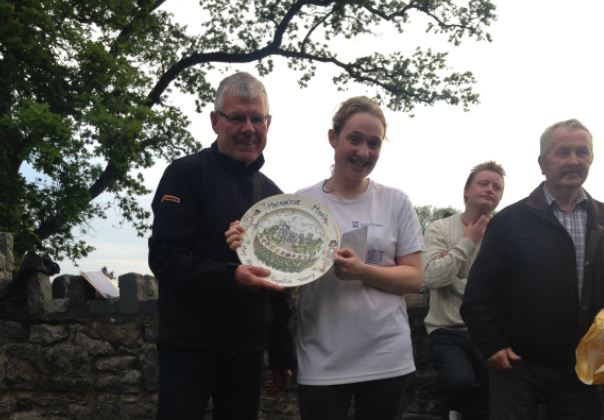 Thanks to Eugene McCarrick for his continued generous sponsorship and thanks also to the hard working officials. The Grand Prix remains in Malahide Castle for the next round of the series on  Thursday next, June 5th, for one of the best club races of the year The Michael Murphy Memorial 5 Mile.