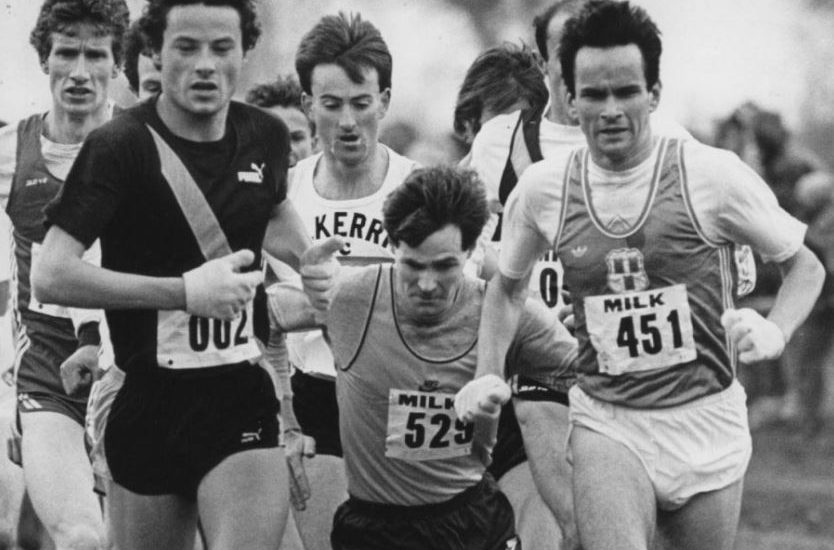 With the National Cross Country down for this weekend and of course deferred to whenever courtesy of you know what Peter McDermott takes us in the DeLorean time machine back to good old 1986 and the Clonliffe centenary year.

This “ retrospective ” will take us all the way back to the National Senior Cross Country Championship of 1986. Clonliffe had won the National Senior team title five times since first winning it in 1976. But we had lost it to Limerick in ‘85 and ,as 1986 was the Club’s Centenary year , it was considered absolutely imperative that we should win it back to celebrate this important milestone. Furthermore, to acknowledge Clonliffe’s 100 years in existence, the governing body BLE had given us the honour of staging the championships in Santry Demesne. So, no pressure then . Win back the National on our own ground in our centenary year. Over to you  Mr. Captain , Paddy Marley . Even the President, Colm Brennan, gave Paddy the dreaded vote of confidence.

But Paddy had a star studded team at his disposal , containing at least three of the top distance runners in the country. It was led by Jerry Kiernan, still basking in the glory of his Olympic performance a year and a half earlier. Breathing down Kiernan’s neck was a cheeky young buck called Noel Harvey who wasn’t in awe of Jerry or anybody else and who would dispute his status as being No.2 on the team. And then there was Dave Taylor,  a 3:54 miler who had transferred to Clonliffe from DSD , a move which aroused as much controversy as Van Persie’s transfer from Arsenal to United. The old guard of Denis  Noonan ( 13:54 for 5K ) , the lion hearted Gerry Finnegan and the indomitable P.Keane we’re still there.  A youthful Eugene Curran was on the team, Clonliffe’s most recent Sub-4  man. And finally , there was Dermot Redmond . Dermot was considered to be the domestique of the squad but he was utterly reliable and had, on more than one occasion, proved to be the ace in the Clonliffe pack.

The National back then was 12K ; six by 2K gruelling laps. Auld fellas now probably look on today’s races over 10K and think that the modern athlete has it easy . But back then there were even older , and possibly grumpier , auld lads who scoffed at 12K . “ How far is that anyway ? Seven and a half miles ? Rubbish . Back in my day it was always 9 miles – just like the English National – with a few barbed wire gates , ploughed fields and a couple of streams thrown in”. But the condition of Santry Demesne in those day’s ensured that the race would be tough. Forget about the beautiful, manicured lawns that characterise the park today : back then it was an overgrown wilderness. The grass hadn’t been mowed for years and there was layer upon matted layer of grass, nettles, weeds and thistles. It was a haven for wildlife and, on a typical run around the park, you would see hares, rabbits, squirrels, badgers and foxes scuttling away into the dense undergrowth. A herd of cattle also grazed on this vast, steppe-like environment; calm creatures who gazed on runners with stoic tolerance . A narrow path had been beaten by dozens , if not hundreds, of Clonliffe runners over the years through this jungle . Every September a tractor drawn mowing machine would cut a wider swathe along this path thereby enabling athletes to train , running through a veritable tunnel surrounded by high grass.

To compound the difficulties February that year turned out to be the coldest on record. For the entire month we endured a bitterly cold wind from the East which must have come all the way from Siberia. This resulted in what older people called “ a black frost “. This was not the beautiful, white blanket of hoar frost which poets have waxed lyrical about  : “ dancing and sparkling, grasping the sun, the hoarfrost glimmers like diamonds”. Oh no ; this just left the ground rock hard , dark and bleak , a surface like concrete.

In spite of this , Paddy’s Panzers had trained hard . Brutally tough , unforgiving sessions had been carried out on the Santry course itself and on the famous ( infamous ? ) Munich Lap in the Phoenix Park . Could we wrestle back the title from Limerick ? Rumours abounded in the final weeks before the National . They were going to bring back Mick O’Shea from Providence. Neil Cusack was doing “ animal “ workouts : Cusack had the reputation of being the hardest trainer in the country . He had won the Boston marathon while still a student in East Tennessee, he had won the Dublin marathon in 1981 . Both himself and O’Shea had been members of the Irish team which had won Silver medals in the World Cross in 1979. They also had Robert Costello who had just missed out on a spot on that Irish team ( Eamonn Coghlan being preferred in rather controversial circumstances) and Richie Clifford who was also a very solid runner . Our spy in the Limerick camp, Mick Kearney informed us that “ they were flying in training “.

The day before the race turned out to be a beautiful, sunny Spring day . A total contrast with what we had experienced for a month before. The course building crew,  consisting of Paddy Marley, Seán Callan , Laro Byrne , Johnny O’Leary , Tommy Griffin , Maurice Ahern , Pat Bonass and several others who had been press ganged into service , basked in the unexpected sunshine . Much to their relief a slight thaw made it possible to drive stakes into ground which had layers of Antarctic like permafrost on it the day before. Hopes were high for benign conditions the next day . Famous last words. That night the frost returned with a vengeance and even the brass monkeys stayed indoors .

The morning of the race dawned dull and overcast . And very quickly things got even darker . The Captain never wants to get a phone call from one of his A team on the morning of a race because ,invariably, it means bad news. But Paddy Marley received the news he had been dreading: Jerry Kiernan had an Achilles niggle and was pulling out of the race . At about 1.30 that afternoon, Paddy went into the dressing room and informed the other members of the team of this hammer blow . If ever a motivational speech was needed this was it. And Paddy was not found wanting. It might be an exaggeration to say that he gave a rousing speech akin to Henry V’s before the battle of Agincourt – but it wasn’t far off it . And instead of being downcast , one young cocky buck was actually seen to smile !

The afternoon started well for Clonliffe with Mary Donohue winning the Women’s race .  “ Wee Mary “, as the Donegal brigade always called her, had only taken up running a few years before . She had ran in the Women’s mini- marathon just for fun but her talent was spotted by Kathryn Davis ( who herself  had won the National Senior in ‘78) and she signed her up for Clonliffe and proceeded to coach her with enormous success.

And then the big moment arrived : the start of the Men’s Senior race . Hard to imagine now but it started in the field where the Santry Sports Clinic now stands. Nothing there then but a vast , open field. A young man wearing a white vest with “ Kilkerrin” written on the front of it bolted straight into the lead . Only the real aficionados knew that this was Richard Mulligan, back home after spending four years in Providence College ,R.I on athletics scholarship . He later became known as “ Blocks” due to his penchant for blistering starts . He was followed by Gerry Deegan of Waterford who had won a number of Inter County titles and had represented Ireland in the steeplechase in the 1984 Olympics. There too were two English born  Irishmen who had declared for Ireland : John Woods ( Liverpool) and Paul O’Callaghan ( Tipton). And then the famous black and amber vests of Taylor and Harvey.

Kingston Mills, a 2:13 marathon man( whom we often see on our televisions these times in his role as Professor of Experimental Immunology in Trinity ) was right up there  running alongside  two other fine athletes, Brendan Downey of Kildare and Roy Dooney of DCH. The Clonliffe supporters were going crazy , running back and forth across the frozen course cheering on their team . Mad young fellas like Tom Griffin , Ken Harris and Gerard Deegan were there shouting encouragement as they themselves ran like mad things through the trees , scattering all forms of wildlife before them . Young Griff’s idea of encouragement was closer to verbal abuse as his favourite exhortation was “ Get the lead out of your arse you lazy f****r” and “get up outa that “.

While we had two in the top 5 , some of the Old Guard were struggling. But to counter this setback , the expected Limerick challenge was not materialising. At half way a group of five broke away : Mulligan , Dooney , Woods, Harvey and Taylor. The pace on the hard ground was relentless. Pat Bonass was trying to get people to pick a winner and to put their money where their mouths were . And then , with about 600m. to go it happened : Taylor stumbled and fell causing a certain amount of disruption among the group . But that was the moment that Harvey pounced . Immediately and smartly recognising that this was the decisive moment , he kicked and really went for It. Cheered on by delirious Clonliffe supporters,  Harvey gritted his teeth and came home with a smile on his face – or was a rictus of pain? He just held off the brave Mulligan who had done most of the work and a fast finishing Dooney . John Woods came 4th. and a disappointed Taylor was 5th, (Taylor,however, would win the next two National Senior XC titles in ‘87 and ‘88.) Young Eugene Curran came in 15th. and the Clonliffe scoring quartet was completed by the ever dependable Dermot Redmond in 20th. position .

That gave the host club a total of 41 and a comfortable victory over Limerick on 93 and DSD on 178.Harvey was swamped in a deluge of back slapping supporters. Paddy Marley’s smile had to be surgically removed . Laro Byrne , paraphrasing the Olympic official opening statement, uttered the joyous words “ Let the celebrations begin”. And , after all the paraphernalia had been cleared away by Callan’s Crew , that’s exactly what happened. Everybody retired to the shebeen under the stand , officially and grandiosely known as the Clonliffe Lounge . Piles of sandwiches and scalding pots of tea ( laced with Black Bush ) were consumed . Some headed home to rest for a while but vowed that they would be back . Laro ordered them to make sure to “bring a pound for porter“ – and so they did . The hero of the hour came back to bask in the limelight. But this being Clonliffe, the epicentre of Slaggin’ , he wasn’t allowed to bask for very long . The professional s**t  stirrers soon posed the question to him “ If the Great Hairy One had been running – or if Taylor hadn’t fallen – would you still have won?” Doctor Harvey, Ph.D , narrowed his eyes and with Obama like confidence replied “ Yes , I would “.

It had been a Red Letter day in the long, illustrious history of the Club : two individual winners and the Senior Men’s team title . What a way to celebrate 100 years !