St. Malachy`s College, Belfast came out on top winning the Lar Byrne Memorial Shield for best overall school at a wonderful Brother Schools Invitational Cross Country in Santry Demesne this afternoon. It was a proud day for the school`s coach Joe McAlister who competed on the St. Malachy`s team that won this award back in 1992. Today his lads were in inspired form clocking up a hat trick of team wins : minor, junior and inter, even more impressive was the fact that they didn`t field a senior team, so it was three out of three! 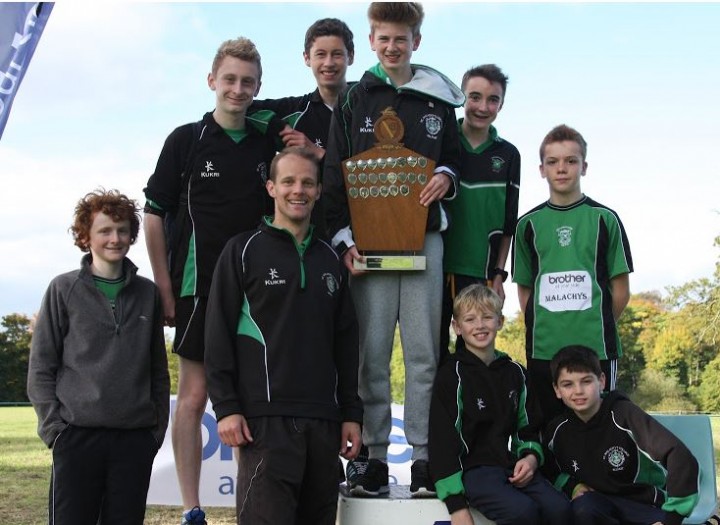 It was a truly wonderful day`s sport. Santry Demesne looked fantastic, thanks as always to Fingal County Council for their assistance and work in the park, bathed in warm autumnal sunshine. The numbers of athletes competing was inspiring. The sight of in excess of 200 primary school`s athletes thundering down the start straight bringing a smile to many faces. All safely making it through the event, all finishing with smiles on their faces and post race the park a sea of Brother T- shirts.

The two primary schools races got the day off to the best possible start. The girls race was won by Emma McDonnell (Corpus Chrisi), providing a home win, Emma is herself a Clonliffe Harrier, in fine style with Antonia Shodiya (Mary Help of Christians) 2nd and Lara Phillips (St. Fiachras) 3rd. Antonia lead the girls of Mary Help of Christains to a successful defence of their team title on 21 points with St. Fiachras 2nd and Mount Anville 3rd. The boys race was possibly even bigger with 250 plus charging around the 1,000m lap, victory went to Denis Sileviskiy leading St. Brigids to another team win, Sean Murray (St. Malachys ) was 2nd with his schools taking team 2nd and Noah Maguire (St. Michaels) 3rd.

At 1.00pm sharp the secondary programme commenced with the minor girls also running over 1,000m and again another huge field in this race lead home by Corrin Kenny. With the girls of Dominican College winning the team race. the boys covered the bigger lap of 1500m and again a great turn out. St. Declan`s College`s Sean Donoghue took this one in fie style from Liam Clancy (Templeogue) with St. Malachy`s Daniel McComiskey 3rd. The team of course went to the Belfast boys, Col Eoin were 2nd and Ard Scoil Ris 3rd.

The distances continued to get longer for the older age groups, however again it is pleasing to report that all managed the distance without too much distress. The inter girls racing 2,500m Sorcha Healy (Holy Child) was 1st, Abbey Taylor (St. Gerards), daughter of former Clonliffe great Dave Taylor, was 2nd and Jodie McCann  (Institute of Ed. ) 3rd. The team honours were taken by the girls from Holy Child Kiliney . The inter boys race featured initially a great four way battle but half way around the 2nd of 2 1500m laps the group was down to three as Alex Hogan (St. Aidans) was cut adrift, at the turn in Daire Flynn of St. Declans took an excellent win, with Conor Halpin (Blackrock) chasing all the way to the line and 3rd Niall Harvey (Presentation College).

Vanessa O`Connor was a popular winner of the senior girl`s race, repeating her win in the Brother race a few years back as a junior, With Orla Walsh (Muckross) 2nd and local Santry and Clonliffe girls Alannah Cooley (Dominican College) 3rd. St. Dominics took another win in this one, and in the process secured the best girls secondary school prize.

The final race of the day was the senior boys 5,000 race, three and a bit laps, and featuring four trips up the dreaded garden wall. After a comfortable opening laps Cathal Doyle (St. Aidans) and Clonliffe stepped on the gas and thereafter his victory was never in doubt, running away from the field to secure a fine win by a large margin. 2nd and 3rd were school teams mates from Rathmore Christy Conlon 2nd and Eoin McCann 3rd. Cathal lead the reigning All Ireland Champions St. Aidans to a comfortable win on 21 points from Col Eoin 47 and Belvedere College 58 points.

So another brilliant Brother Schools Cross Country came to an end, a most enjoyable day. Clonliffe would like to thank the athletes who took part, their schools and coaches, all who officiated on the day, the course builders and in particular our fantastic sponsor Brother.