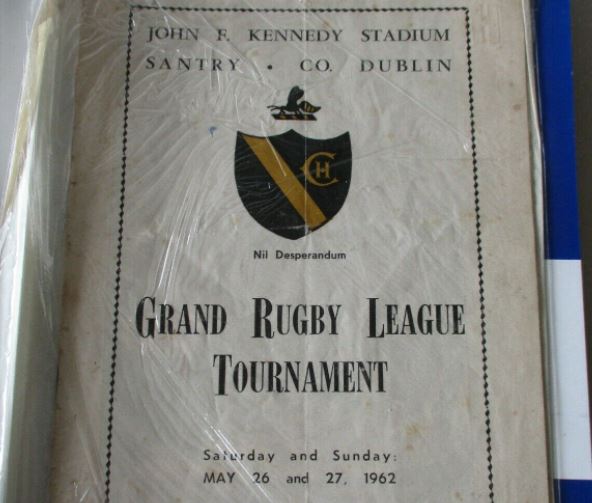 Maurice Ahern: 1962 was a dark time for the “debt”on Clonliffe’s stadium, then called the John F. Kennedy Stadium, Santry. The hoped for financial bonanza from the International Athletics Meetings of 1960 (return of Herb Elliott ) and the 1961 (New Zealand world record 4 x 1mile ) had not materialized to any substantial degree. And so with the Club’s trustees under increasing pressure from the creditors it was decided to embark upon a venture of bringing 4 of the top Rugby league clubs from England to play in a tournament with Semi Finals on a Saturday and the final on Sunday. At a time in history when Rugby Union was strictly amateur it was felt that  a tournament with the professional Rugby League teams would be a huge attraction. At this particular moment in time televised sport was in its infancy, (none of your Sky Super Sundays back then!) And so 60 years ago, May 26th & 27th four Rugby League teams: Widens, Workington, Featherstone Rovers,and Huddersfield arrived in Dublin to display the the skills of the professional “League” teams. Sadly for the club the expected large attendance did not happen -and so it was time to update our begging strategy!