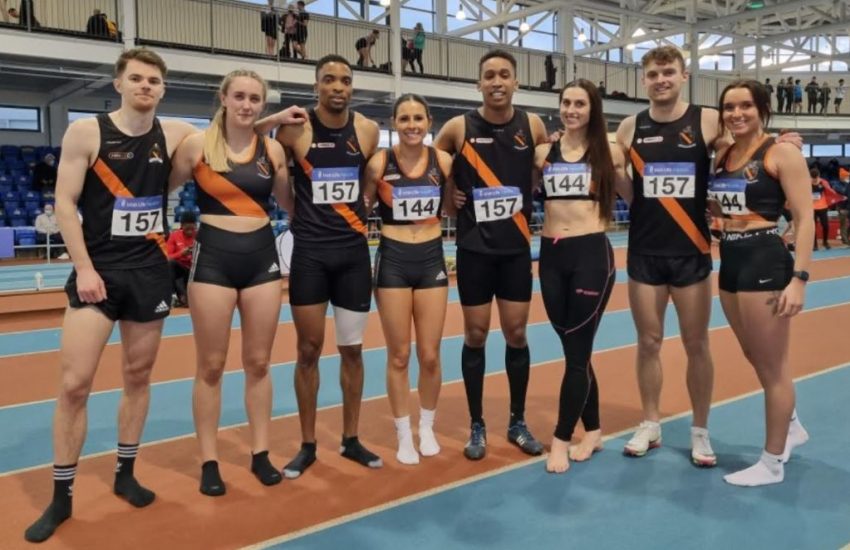 Please forgive the question mark in the headline. Although the calculations carried out by us have both the men and women’s teams firmly in the top six and thus qualifying for the final of the national indoor league on February 12 no official results have yet been released.

Anyway onto the action from the TUS arena in Athlone where once again there was great representation by the clubs track and field athletes and some very encouraging performances to boot. Starting off with the women’s team first in action was Natalia Gill, who the previous day had completed and finished third in the combined events, and although she was a pretty tired athlete she gave it her all in the 60 H finishing fourth in her heat (11.85) and bagging four points for the cause. In the 1500 Laura Power ran a blinder knocking some eight seconds off her 1500 PB (set outdoors it must be added) to place fourth in a time of 4.41.51 and another nine points were in the bag. In heat two of the 400 Leah Bergin placed a battling fourth in a time of 59.39 and in the process another six points. The final track race was the always entertaining relay, this time a 4 x 200, another really gutsy performance from the girls: Snezana Bechtina, Lauren Carr, Leah Bergin and Anna Heavey, on her club debut, the girls took third in heat 2 in a time of 1.47.79 and another six points. In the field events Snezana Bechtina took fifth in the triple jump with a best of 9.85 and took eight points. Edel Maguire was joint sixth in the high jump with a best of 1.35 and another 6.5 points taken and finally, in the nature of the league, Lauren Carr took one for the team lining up in the WFD where she threw 3.64 to take ninth position but more importantly four points.

By our calculations the women’s team finished up on a total after the two rounds of 92.5 points in fifth position a mere half a point ahead of sixth and, subject to official confirmation, have qualified for the final. Report be updated as soon as we have final news on this.

The men’s team have qualified fairly comfortably second half a point behind Leevale and well clear of Nenagh Olympic in third. It was a very solid performance from the men’s team with maximum points taken by Simon Galligan in the WFD (5.84) and also by Marcus Lawler running a new 400 PB of 48.12. Marcus also anchored the 4 x 200 team of François Croller, Pascal Touch and Chris Sibanda who won heat three in a time of 1.30.10 to take second overall. Ben Guiden ran a very smart race in the 1500 placing third in 4.01.51. Timmy Crowe as always answer the call and lined up in the 60 H finishing fourth in his heat in 10.05. Another answering the call was young Michael Coleman who was cool as the proverbial cucumber in the high jump taking joint fifth with a best of 1.70 and then Pascal Touch also taking in an event that might not necessarily be his first choice, the triple jump where he placed fourth with a best of 12.01.