Another good step forward for the senior men`s middle/long distance squad with the taking of bronze at the National Road Relays in Raheny today. After a number of years were the squad has finished well outside of the points paying positions there was a fresh determination about the guys today. Indeed with three teams competing as a whole it was a great turnout by the senior men.

With Raheny having another crack squad out they started as firm favourites and with very strong teams from DSD the Donore Harriers and KCH the Clonliffe men were always up against it to finish in the top three. Efrey Gidey got the a team off to a very solid start running a strong lead leg and passing over in fourth (9.28)  to Cathal Doyle. Cathal who last year made significant strides over 1500 once again showed great speed over his mile leg and ran superb, the fastest of the day of 4.17 to propel the team into second place. He passed on to Ian Guiden who was running the crucial 3 mile leg. Ian has been a prolific supporter of the Clonliffe Road relays effort in recent years and this was his sixth time to race in this event. The 3 mile leg featured Kevin Dooney (Raheny), Hiko Tonsa (DSD) and John Travers (Donore). Travers proved to be the class of this leg with a 13.55 to bring Donore right back into the proceedings however Ian stuck gamely to the task and ran an excellent leg of 14.34 to pass over to Colm Rooney holding onto bronze ahead of DSD. By this stage it was a battle up front between host club Raheny and Donore over the final 2 mile leg, in the end it was Brian Fay who took the home team Raheny to gold and retain the national road relay title. A short time later it was the battle for bronze, a three way knock out contest: Clonliffe v KCH v DSD. Down the home straight Colm Rooney sprinted like the Rooney of old to pull away with a 9.25 leg and deliver brilliant bronze for the Clonliffe men. 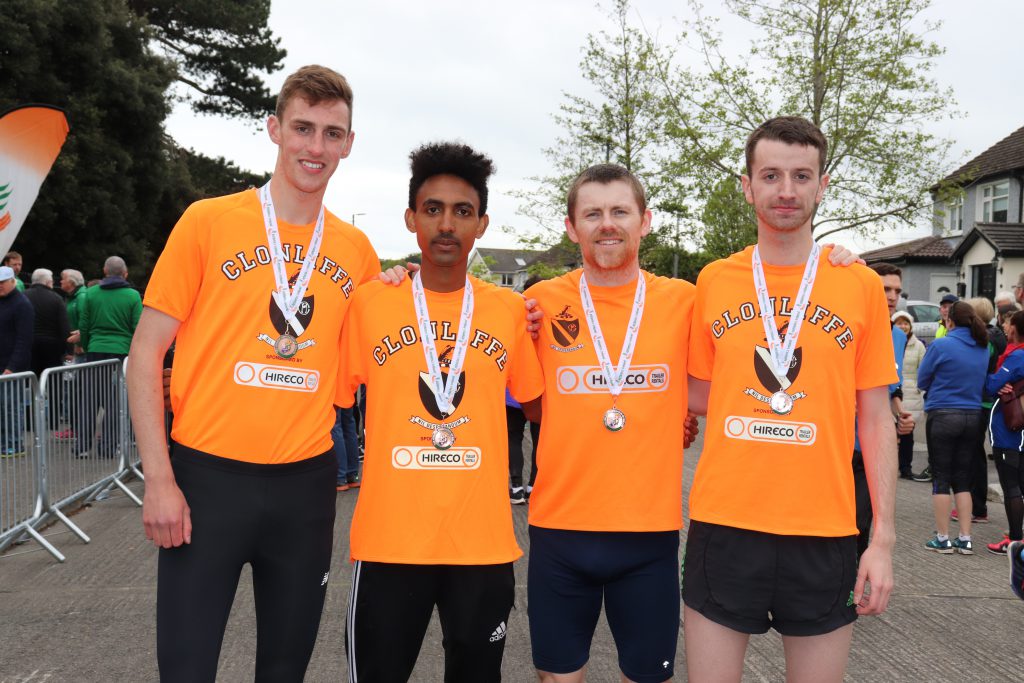 It is also very pleasing to report on a solid run by the Clonliffe women, again and a resurgence in the women section to see a black and amber women’s team been fielded for the first time in a couple of years. It was indeed a very young squad but a squad with a great future. The team put in great battling effort by Ali Fernandez (6.01),  Alannah Cooley, who it must be said ran an excellent 2 mile leg of 12.04 and Hannah Browne (6.26) as the team placed 15th.

Congratulations to all of the Clonliffe athletes today. Great stuff!