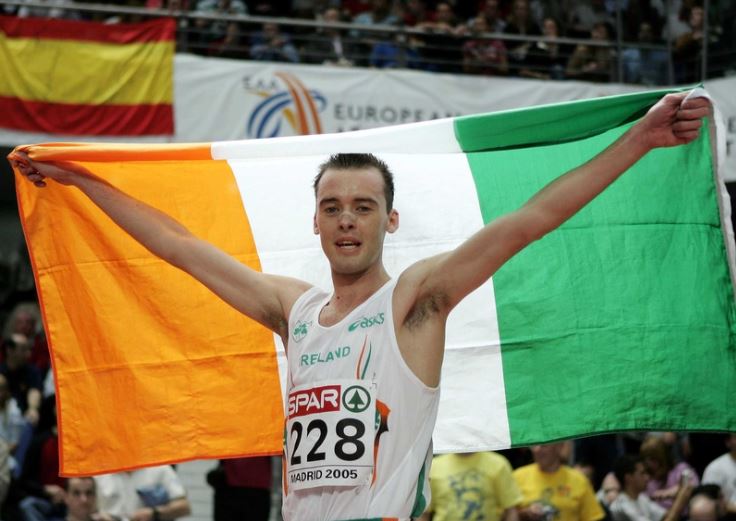 With the European indoor Championships 2021 having wound up in Poland a week ago today we take a timely look back at the 2005 European indoor 3000 gold winning performance of Clonliffe’s Alistair Cragg which to this day remains the most recent Irish middle distance gold medal at the Euro indoors.

Cragg went into the 2005 Madrid 3000 final on Saturday March 5th as the fastest man in Europe and indeed the second fastest in the world that year, and on the back of making the Olympic 5000 final some 8 months previously. Over the early laps of the race a lot of the ‘dirty work’ was done by fellow Irishman Mark Carroll. With 6 to go Cragg injected the pace destroying the field and came home a clear winner taking gold in 7.46.32. Former champion John Mayock of Britain held off Reyes Estevez (ESP) widely tipped before the race to be Cragg’s biggest threat, for second place.

A delighted Alistair Cragg said afterwards: “The temperature and the whole arena in here wasn’t conducive to fast distance running. And when I went with six left to go, even the likes of Reyes Estevez couldn’t come with me, and he’s one of the distance greats.”

In recent years Alistair has turned his knowledge of the sport to great effect as an agent, recent Morton Games have featured many of Alistair’s athletes including the legendary Lopez Lomong in the 2018 Morton Mile. This year Alistair has embarked on a new venture having set up a pro team in conjunction with Puma in North Carolina in the US.