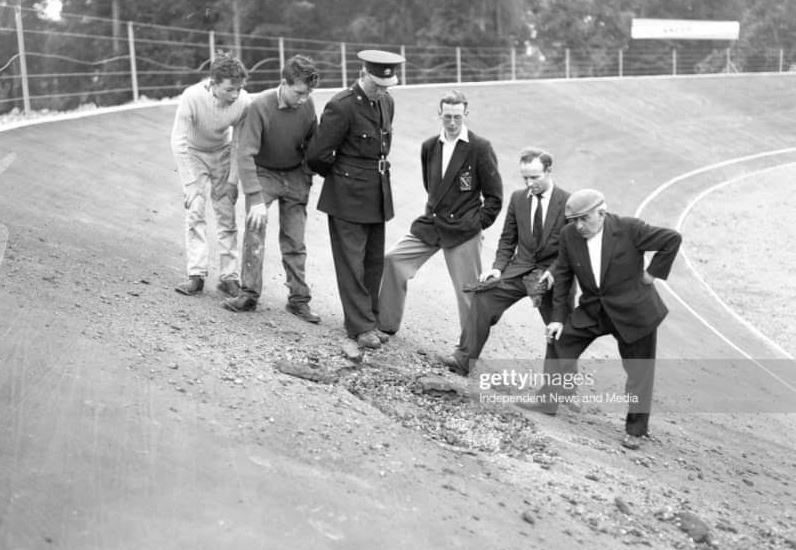 Yes, you’ve read that correctly! Only a year after the official opening of the Clonliffe Harriers Stadium in Santry the stadium was in the news headlines but this time for the wrong reason. In the early hours of June 15, 1959 Santry was rocked by a loud explosion at the Stadium following the detonation of a bomb!

Last week a piece on the Glasnevin Facebook page was doing the rounds so we’ve looked a little deeper into the June 1959 events. The background story is equally bizarre as the above headline.1958 had seen the opening of the Clonliffe Harriers Stadium in Santry with Clonliffe’s Billy Morton promting two outstanding and now historic Track Meets later being known as “the Summer of World Records” as firstly Albie Thomas had set a world 3 mile record in the July Sports and then in August Sports the most famous meet in the history of Irish athletics as firstly Herb Elliott set a new world 1 mile record and the following day Albie Thomas set a 2 mile world record. In 1959 Billy Morton looking to expand the appeal of the stadium to a sports mad Irish public hit upon the idea of a cycle race in the stadium.

As Guinness celebrated it’s 200th Anniversary somehow Billy persuaded the chairman of Guinness, Lord Moyne to fund the construction of a banked tarmac cycle on the outside of the track. In a six week period a 515 yd banked cycle track was constructed. Billy then using his renowned skills of persuasion set about attracting some of the best cyclists in Europe to come to Santry. These were the days of Ireland’s first and at the time only professional cyclist Shay Elliott who of course was immediately signed up and then Billy set his sights further afield. He managed to sign some of the world’s best cyclists including Fausto Coppi (ITA) , a two time Tour de France winner and five time Giro d’Italia to come. Also signed up were French professional cyclists signed up included Roger Hassenforder a stage winner on several occasions in the Tour de France and André Darrigade and the first British cyclist to complete the Tour and a stage winner in that year’s event Brian Robinson The Santry meet was a two-day extravaganza which included a sprint, pursuit and the extremely popular at the time ‘devil take the hindmost”.

Coppi arrived at Dublin airport, looking suitably Italian cool. He was then brought to the hotel which Billy had booked for the overseas cyclists Groome’s Hotel which was situated on Parnell Street in Dublin city centre. Later he received a telephone call from the hotel saying that the somewhat temperamental Italian was dissatisfied with the room he’d been allocated. It was on the first floor with the message relayed to Billy that “Fausto does not walk up stairs.!” Billy of course arranged a change of rooms for the star turn getting him a the ground floor room but apparently was to put it mildly somewhat put out and was reputed to have said: “Well f— that pigeon-chested Italian.”

In the heel of the hunt it was as well that Coppi’s hotel was situated several miles away from Santry as he would have been woken from his slumber at 4 AM by the explosion! The main stand and track sustained considerable damage but a small army of volunteers and workmen managed to repair the damage and the show went on attracting another bumper crowd to the stadium. In the on track action Shay Elliott and Fausto Coppi faced one another in the pursuit which was won by the Irishman. Elliott also won the sprint with Coppi taking the win in the “Devil take the hindmost”.

The Santry Bombers were never identified or charged, indeed the chief suspects, the Republican movement, specifically went on record denying any involvement. As regards the other players in this affair, Billy Morton never again promoted pro cycling at Santry Stadium, amateur cycling did continue at the stadium for well over a decade post 1959, Billy in addition to athletics events did promote other sports including a profession Tennis tournament and Rugby League in the stadium. One of Billy’s French cyclists André Darrigade a month later won the World Road Race Championship. Shay Elliott was the trail blazer for the Kellys , Roches and Bennetts and in 1963 became the first Irishman to win a stage in the Tour de France and to wear the Yellow Jersey. The story ultimately had a tragic end as Fausto Coppi some six months on from Santry travelled to Africa for a road race where he contracted malaria and upon his return home to Italy died of the disease within a matter of days on the 2nd of January 1960.

To see a silent film from Lorcan Film Unit on the stadium bombing click: https://youtu.be/uVmqMuoQMuk