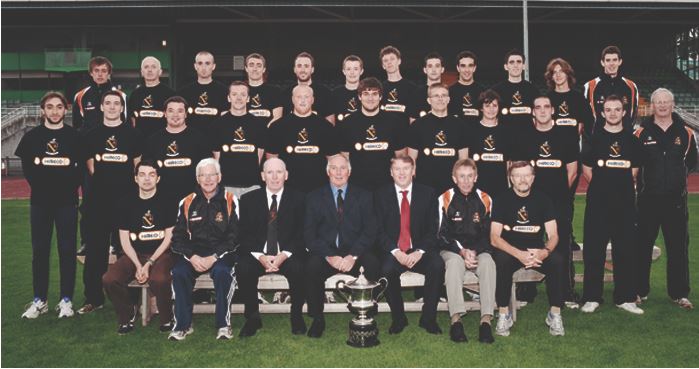 This grey February Monday morning we look back to the summer of 2008 and the national track and field league. It would be fair to say that before the dawn of the new millennium Clonliffe Harriers was more renowned as a cross country and distance running club rather then a track and field club. All that began to change in the early 2000’s as the influence of the club’s track and field coaches, in particular John Shields and Bart Rogers began paying dividends with the eyes of the club captain, initially Peter McDermott and then in 2002 Joe Cooper, turning towards the prize of the national league title and with it the promise of Clonliffe appearance at the European club track and field championships. As the decade wore on Clonliffe Harriers were getting closer to what was now becoming in Joe’s mind the ‘Holy Grail’ but tantalisingly close as it may have been it always seemed to slip from our grasp at the last moment. 2006 and 2007 had seen the black and amber finish as the bridesmaids on both occasions to North Down.

2008 had already born witness to the Clonliffe men capturing a 5th National Cross Country title in a row (see earlier Monday Memory). The National Track & Field League campaign had gotten off to the usual solid start as the club successfully negotiated the early rounds and with the final in Tullamore on July 27th, the week after the national senior Track & Field, a determined team boarded the bus bright and early at Morton Stadium Santry. It was a team boasting the proverbial dosage of youth and experience.

As usual the first track race of the day was the race walk where Joe Cooper sprung a surprise. Competing that day was Clonliffe’s former national 10K and 20K champion, all of 30 years since his last national title, Johnny O’Leary with a sixth-place finish getting early points on the board. Clonliffe’s most recent national champion, Colm Rooney, who won the 1500 title seven days previously, took maximum points in a tactical 1500 as he waited and waiting before outsprinting Leevale’s Mark Hanrahan. The middle distance boys contributed enormously with Mark Kenneally winning the 5000 and David Flynn just before heading to the US on scholarship winning the 3000 steeplechase. Conor Healy also chipped in valuable points with a third place finish in the 800.

The field events this decade had proven to be a great source of strength in depth and this day another national champion, indeed a multiple times national champion, David Donegan with a 4.82m best won the pole vault, Paul Marry took the javelin and Luke Mangan maximum points in the shot. Valuable contributions were also made by Mario Matuzzi third in the triple jump, Eamonn Byrne in the hammer and John Hartnett, a 400 man in the High Jump! Indeed that is the essence of the league as athletes fill in in unfamiliar roles, witness also young 100 sprinter John Conroy competing that afternoon in the 56lb and long jump!

In the sprints after a dodgy start with Danny Kavanagh being DQ’d in the 100, John Laffey dominated the 400 in take the maximum with good points also being contributed by Chris Minn in both the 110H and 400H.

In the best Hitchcock thriller tradition it all boiled down to the final act. The 4 x 400 relay, it was neck and neck between Clonliffe and three in a row pursuers North Down. The Clonliffe tally men were confidently predicting a first ever National League title if, and it was a big if, we could only finish ahead of North Down. The Clonliffe men were drawn in the unfavourable Lane 1. John Laffey got us off to a tremendous start passing over in first, although the concern was that he was the only 400 athlete in the team, to Colm Rooney who battled like the competitor he is to pass over in third place to Conor Healy who ran a storming leg getting the black and amber up to 2nd and then passing on to the youngest member of the squad 18 year old, schools 1500 champion, Eoin McDonnell who displayed maturity beyond his years to hold that second position and more importantly keep North Down in our wake.

The reward: a first ever National track and field league title and a swim for Joe Cooper in the steeplechase water jump!

2008 was a pivotal year in the history of Clonliffe Harriers and heralded in a period of complete domination in track and field as a sequence was put together which saw Clonliffe win the next four titles and indeed over a period from 2008 to the last track and field league in 2019 Clonliffe have one every single year except 2013 and 2014. Roll on the Summer track season!