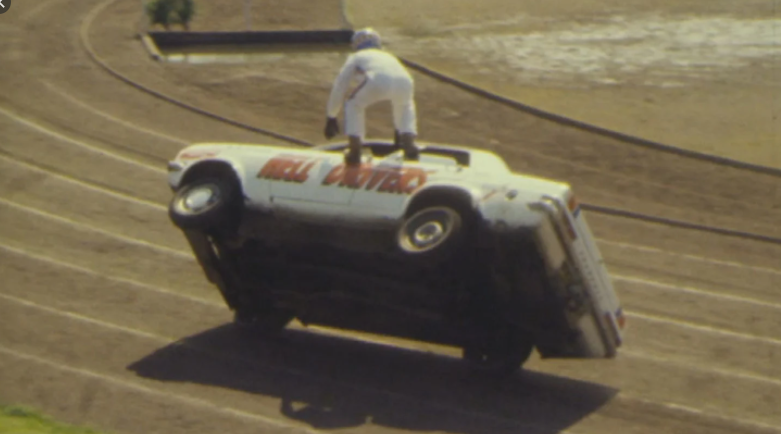 Today’s Monday memory is another chapter in the bizarre history of Morton Stadium/Clonliffe Harriers. If you were amazed by the ‘Santry bombing’ tale then prepare to be amazed once again!

Billy Morton had promoted the use of the stadium for all sorts of sporting and other events over the years: cycling, tennis, rugby and indeed even a military tattoo. Although Billy passed away in December 1969 his foresight in expanding the use of the stadium beyond track and field was clearly very much in the minds of the club’s committee in the 1970s. That can be the only explanation for one of the most bizarre events in the stadium’s history that took place in May 1978: ‘The Hell Drivers Stunt Show’.

The 1970s was the era of the stuntman and the stunt show. Hollywood movies featured epic car chases, crashes and jumps. Evil Knievel and his motorcycles were busy jumping rows of buses and Hotel fountains in Las Vegas. In the UK there was a stuntman called Eddie Kidd who was doing similar. In fact Eddie Kidd put on a stunt show believe it or not in the car park beside the church in Whitehall and in Parnell Park.

With the track in the stadium due to be replaced that year by a brand-new tartan track the committee gave the go-ahead for a show by the ‘Hell Drivers Stunt Show”. This was an international stunt team of men and women, they had come to international recognition by putting together the sequence in ‘Diamonds are Forever’ where James Bond had made his escape down a narrow alleyway by driving his getaway vehicle on two wheels. The stunt show in Santry consisted of cars driving on two wheels, motor bikes going through flaming boards, crashes and rolls. These stunts took place on the cycle track, the infield and also on the track itself. In addition to the show the Hell Drivers also booked the stadium for practice for their Irish tour which included stops in Belfast, Cork and Waterford.

To give you an idea of what was involved we have tracked down some archive footage from RTE showing the practice. This footage was broadcast on the RTE News on 16 May 1978.