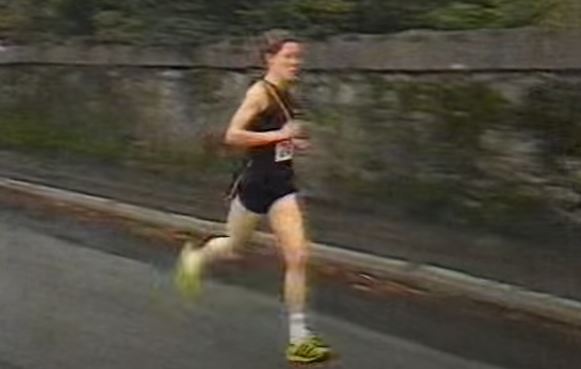 This morning we go back to 1986, which not only heralded the 100th birthday of Clonliffe Harriers but the arrival of Mary Donohue.

In that centenary year Mary was a relative newcomer to the sport having only taken up running in the summer of 1983. At that stage she was a footballer and hockey player. She was particularly proficient wielding the hockey stick and harboured ambitions of an international call up. In any event she decided to enter the 1983 women’s mini Marathon, her first race ever and the from the thousands taking to the streets of Dublin she finished 66th in a time of 43.23. Not a bad time but a time which certainly did not give any indication of the dizzy heights to which Mary would rise in three short years. A few months later, December 1983 Mary finished 10th in the Portmarnock 10k where she was ‘spotted’ by Clonliffe’s Ann Archbold, herself a very fine athlete. Ann doing her duty approached the diminutive Mary for a chat and threw in the crucial question: ‘are you with a club?’. Thankfully the answer was no and the next answer was yes! Thus Mary Donohue arrived up in Santry for training the following week. Initially she came under the tutelage of Tommy Coyle and a short time later came under the wing of Kathryn Davis. Kathryn, of course had been a brilliant athlete herself and indeed was the last Clonliffe winner of the senior women’s cross country title back in 1978, was coaching the clubs women’s cross country team.

Under Kathryn’s guidance fantastic progress was made in a relatively short period of time. The 1984 season for Mary was basically a road racing year. At that time there was a series of 10 road races, all over 10K, under the umbrella of ‘the Guinness Series’ with points being awarded to top finishers in each race. At the end of that series Mary had prevailed. In the winter of 1984 going into the spring of 1985 it was the cross country season and with the strength which Mary now had (‘Guinness for Strength!’) she enjoyed a stellar cross country season, with podiums in many races and then earning a first international vest at the Home Countries International.

1986 was 100 years in the planning! A whole series of events to mark the centenary of Clonliffe Harriers, social events, get-togethers, the Clonliffe 2 to revert back to the traditional Finglas to Glasnevin route but more importantly the club will have the honour of hosting the national cross country championships. The hosting of the National’s back then was a very prestigious affair, back in those days clubs put in a bid to hold the nationals, BLE were in the enviable position of being able to pick and choose. The fact that Clonliffe were celebrating the centenary swung it. Now for the tricky bit!

That famous February morning the fields of Santry Demesne had been frozen solid by a harsh overnight frost. That was no deterrent to Mary Donohue, in fact the hardened ground was more to her liking then the muddy surface that was a feature of the Dublin cross country held earlier that year. In addition to the hard underfoot was a stiff breeze. Mary and her coach got the tactics spot on: stay in the group, no heroics and bide your time. Mary stuck to the plan diligently. She was always in the lead group and as the group broke up she was on the shoulder of Greta Hickey (DCH) , and with a lap to go this is what happened:

(Mary takes up the story as told to clubmate Ken Harris for the Marathon magazine) ‘when I came to the final lap, I found myself feeling very strong, but I was still hesitant to go into the lead. Then I found Greta either just faded or I got stronger. I found I was 5m ahead of her and next thing I heard someone say that I had 10m. As I came near the finish of the lap I was much more determined to keep going, keep the pace up, not let anyone take the race from me and it was only in the last 100 that I realised where I was and what I was doing and then it dawned on me. I think coming up the home straight there is a small little uphill climb and someone from Clonliffe said ‘go on Mary it’s all yours’. It just clicked with me then that I had it. The last 100 was terrific. I was expecting to fall out of bed any minute and the dream would be over! It was a great feeling and one that I will not forget for a long long time’.

That extraordinary win less than three years after putting her toe in the water in the June 1983 women’s mini Marathon made Mary Donohue the national senior cross-country champion, some eight years after her coach Kathryn Davis the previous Clonliffe national cross champion. To put Mary’s achievement into perspective no Clonliffe athlete would climb onto the top step of the podium at a national senior women’s cross country until Sarah McCormack all of 28 years later.

With her newfound confidence as a national champion Mary Donohue went on to enjoy an extraordinary 1986. On 23 March Mary ran for Ireland in the world cross country in Switzerland where she was top Irish athlete finishing in 61st position in a time of 16.00.9 for a really tough 4.65 KM. To put that time in context the race was won by Zola Budd who was only 71 seconds ahead of our Mary. On the track that year Mary finished 2nd to Zola Budd over 3000 at the Dale Farm International track meet in Northern Ireland and in that year’s national track and field championships Mary Donohue once again was a national champion winning the 3000 and the following day was third in the 1500. In the autumn road racing circuit Mary won the centenary Clonliffe 2 and the following day won the prestigious Quinlan Cup at Tullamore Harriers (see footage below from the RTE archives).

So without a doubt 1986 was the year when Wee Mary became a giant of athletics and a name never to be forgotten in the history of Clonliffe Harriers AC.