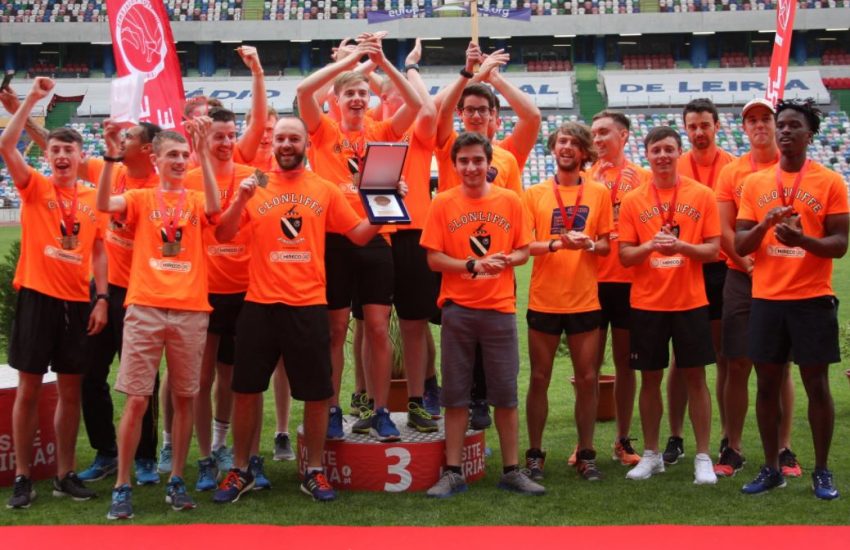 Four years ago next month, May 27th 2017, the Clonliffe Harriers men’s track and field team competed in yet another European clubs championship this time in Leiria in Portugal for the group B competition. It proved to be an historic occasion in the long proud history of our club as for the first time ever a Clonliffe team mounted the podium at European level to take well earned and deserved bronze medals.

The foundations of a magnificent all-round team performance came in the middle distance events with individual wins by Jayme Rossiter in the 3000 SC, Ian Guiden in the 3000, Richie Owens in the 1500 and a second place in the 5000 by Aaron Hanlon.

The competition on the day was very strong with the Italian champions, Atletica Riccardi particularly strong and strong pre competition favourites. A tag which they fully justified as they left the rest very much in their wake, after that there were strong Slovakian and Dutch outfits to contend with. As is always the norm with any team competition over the course of an eight hour day there are highs and lows, solid points scoring in many of the field events from Simon Galligan, third in the hammer, Keith Marks, third in the long jump and Rolus Olusa third in the triple jump saw the black and amber well up in the overall standings. Over the course of the competition we went from 2nd to 3rd, to 4th, back up to 3rd and then it was all down to the relays, the 4 x 100 boys scored well placing fourth and then the final event the traditional curtain closer, the thrills and spills of the 4 x 400. At this stage Ist and 2nd places had been determined, Clonliffe held 3rd with the Dutch champions Haag Atleliek in 4th and breathing down our necks. In the end it was quite simple: keep the Dutch behind us and we are climbing onto that podium.

So from the gun Luke Lennon-Ford leading off all Clonliffe eyes are on the yellow vests of Haag, Luke passes on to 1500 hero Richie a brilliant leg sees Clonliffe hold second but the gap is back to a fraction, onto Mark McDonald with crisp change overs, Mark in turn to Timmy Crowe, who just needs to keep ahead of the chasing Dutchman, the only problem is that this particular Dutchmen is sitting on Timmy`s shoulder! Cool and calm, a little glance over the shoulder, an injection of pace and Timmy is coming down the home straight a couple of meters clear, 2nd place in the 4 x 400 and bronze is secure. History is made.

It was one of the most special days in the history of our club. Joe Cooper declared it to be up there with the greatest performances ever from a Clonliffe team. As a result of that special day Clonliffe earned promotion to group A and the following year we proudly dined at the top table of European athletics.