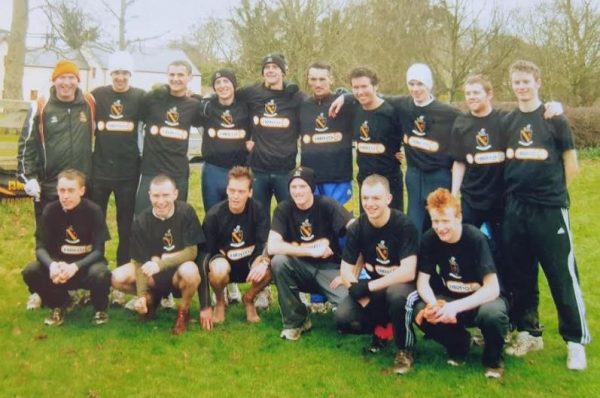 Folks methinks it’s time for a Monday Memory! For all Joe Cooper’s magnificent achievements in leading Clonliffe Harriers to incredible success after success there is one that stands above all others. It goes back now all of 13 years ago. March 6th 2008. It was the day Joe had been working on for a fair few years. The day they said would never happen. It was the day Joe got Alistair Cragg to run in the National Cross Country Championships! A day that Alistair, we can’t really say “fondly”, but certainly remembers to this day!

The venue for that year’s Nationals was the Queens Playing Fields in Belfast providing the ultimate “testing” course: open fields, with a strong wind, a bit of rain, ample sticky mud, sandy dune like hills, a sharp steep hill and sharp bends. Clonliffe had won the four previous Nationals, but tensions and rivalries were running high as Raheny Shamrocks travelled North to “do us over” .

Alistair had just come off a very successful US indoor circuit but made the transition to club cross country runner look easy. Also running his first National senior for Clonliffe was Chris Carris, having only joined Clonliffe in the Autumn of 2007 and cut his teeth in the National Novice cross in December. Chris joined Clonliffe through his relationship with former club President Colm Brennan.

As the race settled the day`s first surprise was revealed the identity of the yellow vested athlete at the head of proceedings: Cathal Lombard, running his first race since completing a doping violation suspension. The second surprise was Gary Murray`s disappearance at half way and the third was Lombard opening of a 30 metre gap on Cragg. Despite Alistair Cragg`s undoubted surprise at Lombard opening such a gap he was well aware of the importance of the day to his club leading the Clonliffe defence shouting to Clonliffe supporters on the last lap : “Are we winning?”

Indeed we were. After the race settled Chris Carris worked his way through the field and easing himself into the top 10 really began to motor, looking on the last lap as if he might even take individual bronze, however, he was overhauled by the fast finishing Raheny duo of Vinnie Mulvey and Mick Clohisey. Chris finished a superb 5th. Having his best race for Clonliffe was a young Sergiu Ciobanu, announcing his arrival as a top class athlete in a wonderful 9th place. The 4th scorer, having scored for Clonliffe in his two previous races, the European clubs and Dublin cross, after a storming run in 13th was Brian McMahon. It was a sweet victory by a margin of 10 points over Raheny, 29 to 39.

The rest of a superb squad also had outstanding runs in Belfast: Cian McLaughlin 16th, and the ageless Paolo Dogilo 19th , places which would usually put an athlete in the scoring four, but not on this day. Colm Rooney 21st. Aidan Bailey 22nd, an injured Gary O’Hanlon 30th and in his first Clonliffe outing Niall Sherlock 46th.

Other interesting things from 13 years ago, David Flynn was 4th in the junior race, having silvered the previous year but gained selection for the World Junior XC, as the junior men took bronze. Another youngster Becky Woods ran her first senior national placing an impressive 16th.

So there you have it, a magnificent 5 in a row and Alistair put the doubters well and truly in their box!