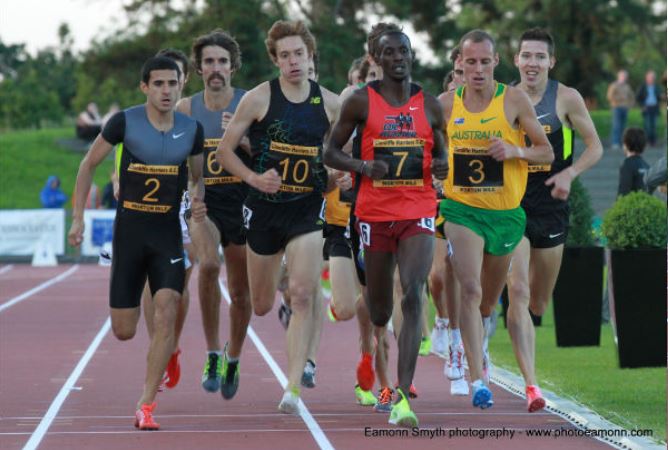 This evening with eyes very much on the Tokyo Olympic Games we take a brief glimpse back at the 2012 Morton Games which were held a matter of weeks prior to the London Olympics, July 25th 2012. That year’s Morton Games was billed as the ‘Morton Pre Games” and with our close proximity to London the event saw a host of Olympians rock up to Santry for their final pre Games outing. It was also the year that Morton Games came of age and our realisation that the promoting and hosting of an annual international athletics meet by Clonliffe Harriers in Morton Stadium was not only viable but necessary for the promotion of our sport and our club in Dublin city.

The event received great publicity in the lead up drawing a substantial crowd to the stadium. Those in attendance, including An Taoiseach Enda Kenny and future Taoiseach Leo Varadkar, witnessed a breathtaking occasion on a balmy summer’s evening. Notable highlights included a hometown win by a young Brian Gregan who the previous year had taken European U/23 silver, Brian drew a great roar from the Clonliffe contingent as he crossed the line in 45.61. That 400 was notable for the appearance as part of his London buildup of Nick Symmonds (USA) who not wishing to risk a hamstring injury by special agreement with the Meet Director took a standing start in Lane one and still ran 47.45! Symmonds went on to make the Olympic final in the 800 where he finished fifth (1.42.95) in the most competitive Olympic 800 of all time and won World silver the following year.

Another young athlete running that night was Tom Barr finishing 2nd to Britain’s Nathan Woodward in the 400H. The men’s 800 also featured up-and-coming athletes who have since become household names, the race was won by current reigning Olympic gold champion Matt Centrowitz (USA) with Charlie Grice (GBR) second. The women’s 800 drew such a world-class Olympic entry that was necessary to split the race into two separate equal races fastest on the night was Melissa Bishop (CAN) who ran 2.01.80 in winning race 2, Bishop subsequently in 2015 was world silver medallist.

That nights Albie Thomas 3000 was a successful attack on the Stadium record which was simply obliterated by Ben True (USA) in a time of 7.44.40. The men’s 100 was won in a lightning fast 10.26 by Jamaica’s Kenroy Anderson with the women’s one by Ireland’s Amy Foster (11.51). Nicole Schappert (USA) took the women’s mile from a quality international field that included Emma Coburn (USA) who in 2017 won the world 3000 SC title and Australia’s Gen Lacaze with every athlete in the field breaking the existing Stadium record.

The traditional Morton Games finale was once again the Magical Morton Mile. It was an extraordinary race there were a dozen athletes were still in contention coming off the final bend. In the dive for the line (literally) the proverbial blanket covered the first half dozen. 2010 Morton Mile winner Will Leer was the declared the winner after the photo finished was poured over for 15 minutes in a time of 3.56.39 from David Torrence (USA) 100th of a second behind 3.56.4 and Ryan Gregson (AUS) a further 500 ths behind 3.56.47, Craig Miller another 400ths behind 3.56.49, Ryan Hill (USA) 3.56.78 and Ciaran O’Lionaird (IRL) 3.57.02.

It was a night which gave us the confidence to believe that we can promote an event such as this. World-class athletes want to race and if we can provide the race then why not. As Kevin Costner so eloquently put it in ‘Field of Dreams’: ‘build it and they will come!’